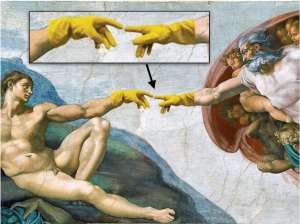 Today’s message was inspired by Walter Farquharson and David Fearon, two retired United Church ministers. Below, I’ve included some of Walter’s comments about the song “Give To Us Laughter” from my website. David frequently sends out strings of cartoons and various humorous items. The image I’ve chosen is from the most recent batch (that I know of!) from David.

While there are a number of things which David and I have in common, one of them isn’t being on time for rehearsals! He often walks into a rehearsal-in-progress announcing, “You can start now. The late David Fearon is here.” However, one of the things David and I do share is a rather questionable (some would say ‘quirky’, others might say ‘perverse’) sense of humour.

When I first viewed this and numerous other cartoons circulating on the net, I thought: “How can we be so insensitive so as to make jokes about our current state of hurt, fear and despair? How can we laugh when others are consumed by loss and grief? How can we make light of the life-giving risks and sacrifices being offered by all-line (not only “front-line”) caregivers?

And then I thought about the last verse of “Give to Us Laughter”:

Even in sorrow and hours of grief
laughter, with tears , brings most healing relief.
God, give us laughter, and God, give us peace,
joys of your promise among us increase.

Here is the opening portion of Walter’s reflection on his hymn text:

Few gifts are as important to us as the gift of laughter – wholesome, heart-felt laughter.

Few people are treasured more in our lives than those who can laugh and who can free us to laugh at ourselves and at some of the ridiculous situations in which we can find ourselves mired.

If we aren’t dressed overly corseted and overly starched when we read the Scriptures, we can read the laughter in the word of God. From Adam and Eve hiding behind fig leaves, to Sarah who will name her son Isaac (Laughter) because it is so ridiculous to begin having kids at her age, to Jonah sulking because God has gone soft on the Ninevites, to the risen Jesus having the nerve to tell the disciples to put their nets down in the water once again even if they had fished a fishless night, the laughter of God liberates and empowers.

If you’d like to read more, go to https://musiklus.com/product/give-to-us-laughter/. There you’ll find all of the verses under “Lyrics as Poetry”, a sample verse played on piano, and the rest of Walter’s reflection (scroll down to find “Comments About Song”).