Give to us laughter as sign of deep joy;
let us in laughing find Christian employ,
joining with stars and with bright northern lights,
laughing and praising and sharing delights.

Why do we worry that we will lose face?
Why act like king for the whole human race?
Often in family, and often with friend,
laughing at pride causes anguish to end.

Even in sorrow and hours of grief,
laughter with tears brings most healing relief.
God, give us laughter, and God, give us peace,
joys of your promise among us increase.

Few gifts are as important to us as the gift of laughter – wholesome, heart-felt laughter.

Few people are treasured more in our lives than those who can laugh and who can free us to laugh at ourselves and at some of the ridiculous situations in which we can find ourselves mired.

If we aren’t dressed overly corseted and overly starched when we read the Scriptures we can read the laughter in the word of God. From Adam and Eve hiding behind fig leaves, to Sarah who will name her son Isaac (Laughter) because it is so ridiculous to begin having kids at her age, to Jonah sulking because God has gone soft on the Ninevites, to the risen Jesus having the nerve to tell the disciples to put their nets down in the water once again even if they had fished a fishless night, the laughter of God liberates and empowers.

I remember a preacher I listened to as a youth saying, “If we want to know in one sentence what salvation really means, here it is: Neither you nor I need to be God!”

Early in my years in ministry I was regularly visiting a woman who had been diagnosed with terminal cancer. Her family members were informed. I was told by them but also told that “Mother doesn’t know. The doctor thinks it better if we don’t tell her. And we agree.” (These were days when that sort of ‘shielding’ was common and considered compassionate.) One day I prayed with her, carefully couching my language, hesitating to pray for healing because I knew her prognosis and afraid of praying for acceptance because that would confirm what she really already knew but was prevented from talking about. When I finished the prayer she squeezed my hand, smiled and said, ”Thank you. But, Walter, remember, you don’t need to be God’s lawyer.”

“If we want to know in one sentence
what salvation really means, here it is:
Neither you nor I need to be God!”

Two Psalms, Psalm 14 and Psalm 53, are almost identical. They are harsh. Both begin, “Fools say in their hearts, ‘There is no God.’ They are corrupt, they do abominable things…” The Psalmist isn’t talking about atheism but about people living as if they were responsible to no-one, answerable to no authority other than their own desires and whims. Everything and everyone can be used to further their need for power, wealth or popularity.

I suspect that, of the hymns I have written, the one that has been sung most often is “Give to us laughter”. Of course, Ron’s tune laughs right along with the words, laughs but does not trivialize.

As a minister working with grieving people, often in preparation for a funeral or service in celebration of a life lived, I noted that it was when a story was told that caught some moment of fun, of laughter, that healing seemed to begin or become real possibility. Laughter was part of what gave the person who had died back to our living.

Over the years I have frequently attended AA meetings and roundups. The combination of laughter and tears is healing, freeing, empowering.

In 1954, Geddes MacGregor, wrote a whimsically serious study of the church of the late middle ages (the 1950’s). It was written supposedly from the perspective of Paul, a 24 hundred ghetto-living Christian teacher living in a future age of intergalactic travel…

The teacher Paul sees the death of humanity, of humanness, as an outcome of a world that had just kept taking itself more and more seriously. The true believers were the only ones who still laughed – and indeed began their services of worship with the invocation, “Let us laugh together to the glory of God.”

Political leaders, some more notably than others, tend to take themselves with increasing seriousness. Responsibility denying corporate elites and corporate spokespersons do the same. Within our various religious clichés, be it progressive, fundamentalist, spiritual-not-religious, we (and I do not exclude myself) pontificate, even when it is to declare ourselves more humble, more open, more welcoming than others.

What is true on the big screen can also be true in our more intimate relationships of small groups, congregations, family. We take our ego-selves too seriously and that means we lose the opportunity to take more seriously the self that is learning to love, to forgive, to seek good for the other.

Often in family, and often with friend,
Laughing at pride causes anguish to end.

God, give us laughter, and, God give us peace,
Joys of your promise among us increase. 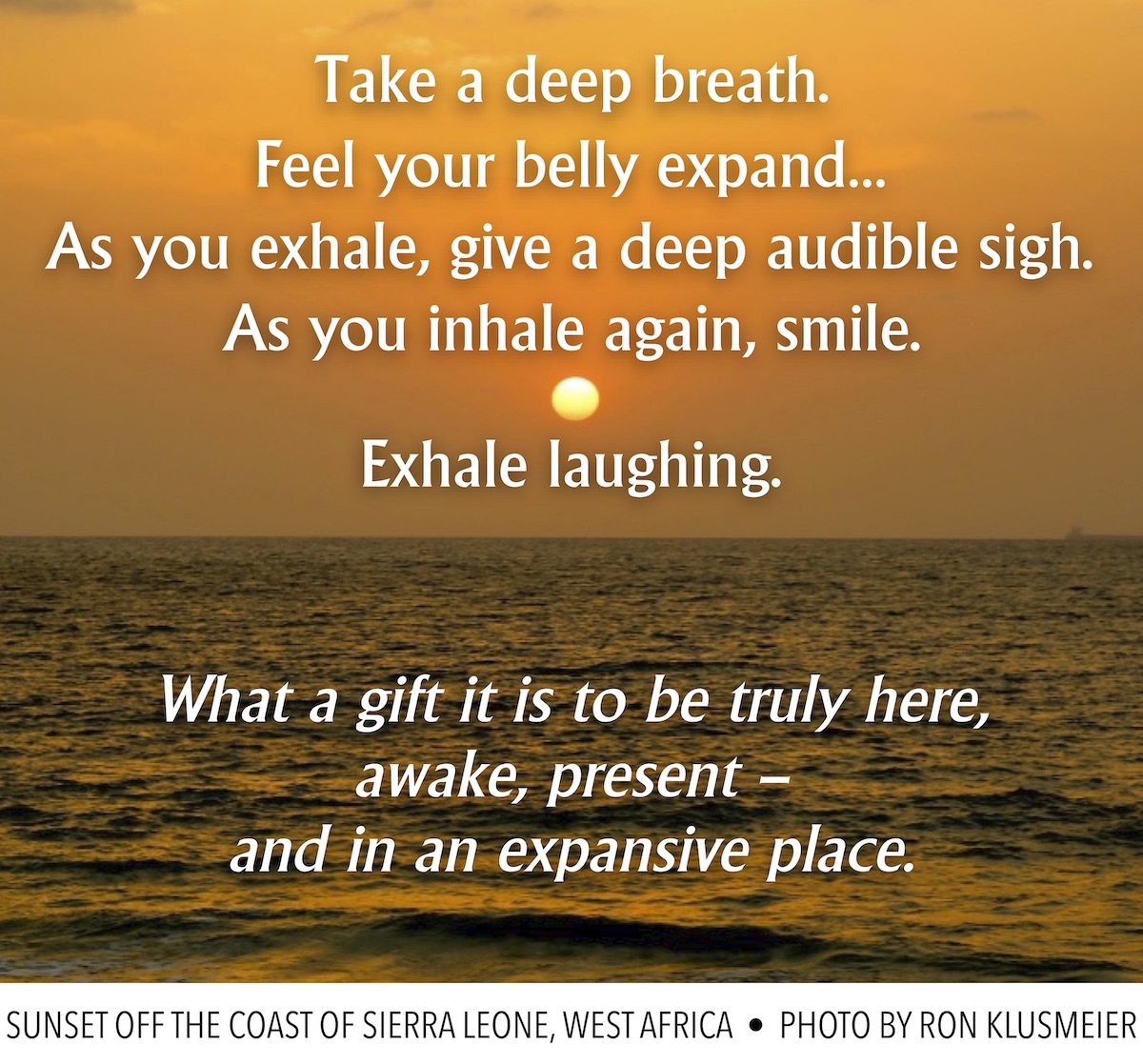 "GIVE TO US LAUGHTER"
One verse played on piano

When using this video as part of online worship, streaming or podcasting, please report usage to onelicense.net (Church Music Copyright Permissions) and/or ccli.com (Christian Copyright Licensing International).ACCOMPANIMENT TRACK
Subscribers and Purchasers may access full accompaniment tracks (including introduction and all verses) through the "Accompaniment Recordings" box found at the
bottom of this column.

The first three verses should be sung ‘with laughter’ in the voices. A light, energetic accompaniment will assist in achieving this feeling.

Note that in the piano version, the notation indicates an eighth rest at the end of each measure. This ‘lift’ is simply one of the ways to help provide a lilt to the accompaniment.

Verse 4 begins slowly for the first half to acknowledge the “sorrow and hours of grief”. For these two lines, the third beat eighth rests should be ignored, playing straight quarter notes instead. Beginning on the third line of this final verse, the music returns to the original tempo and lilt, reverting back to acknowledging those end-of-measure rests.