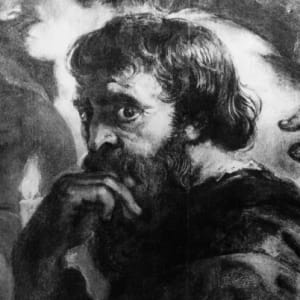 Fair warning: There’s nothing light in today’s post. So, if you’re seeking something to lift your ‘sick-and-tired-of-isolation’ mood, this probably isn’t it.

Yesterday I found myself thinking about Judas. A lot. His role in the story is a confusing and, frankly, fascinating one for me, especially during this holy week.

Consider this: Without Judas, we really don’t have a story. He is the betrayal key which opens doors to the events of the hours and days that follow. Those times include arrest, torture, trial, death. And yet the final portal to be opened to us is one of resurrection, new life. What if Judas was privy to some special insights which meant he ‘knew’ he had to do his terrible deed in order for that final door to be opened? Does that make him a reluctant ‘hero’ rather than a cold-hearted, mercenary traitor? Replying “No way…” to that question is a heck of a lot easier than “hmmm…”. It’s hard to imagine Jesus being a poor judge of character. I mean, after all, he was the one who chose Judas.

Regardless, Judas didn’t pop out of the womb full-grown, ruddy-faced and bearded. Like the rest of us, he began life as a glistening innocent, having no choice about being separated from a life-giving umbilical cord which connected him to his mom. How ironic then that his life ends, this time by his choice, with another knotted cord.

I wonder about his parents. I wonder if he had siblings. I wonder if he had a girlfriend or boyfriend. I wonder what, in the name of God, was responsible for the metamorphosis which transformed him from being a cooing, gurgling infant — hopefully conceived by an act of love — to reach a point of being capable of such a heinous betrayal.

I do know that I find myself feeling like we’re losing something important. I vividly recall having a conversation with a very bright 22 year-old woman who had asked me the dreaded question, “What do you do?” In those situations, especially with people who have no understanding or interest in ‘church’, I must confess that I generally approach the answer somewhat apologetically. As I stumbled through my reply that I was a composer who writes religious music, she said, “Oh yeah, I know a little about churches. Don’t those people believe in that guy called Judas Christ?”

Through her poem/song text “Lullaby for Judas”, Shirley Murray nudges us to feel compassion at a pretty scary level. But after all, don’t we preach about justice for all? Can our faith really allow us to take the leap that permits us to see Judas as victim? Honestly, and speaking for myself, I just don’t know.

In the first verse, we’re introduced to a babe, a “happy child”, with laughing eyes.

The second verse helps us see how much goodness, healing, feeding Judas would have witnessed. The last two lines of that verse are like a punch in the gut to me.

The third verse suggests that Judas, as a child, could not have possibly known what lay ahead. I want to believe that it was actually the ‘goodness’ in him which drove him to his tormented, self-inflicted penance.

I love this song. I love it for the way it challenges me to think and feel. Since the first time I saw the words, I’ve not been able to shake the image of Baby Judas.

The child is sleeping sound
whose star is yet to rise.
Like any baby born,
an innocent he lies,
this Judas child, a happy child,
with laughter in his eyes.

The child can never dream
the wonders he will meet:
the hungry filled with bread,
the bitter lives made sweet,
the friend, forgiving to the end,
who sees his heart’s deceit.

The child is sleeping sound
who knows no horoscope:
his kiss that will betray,
his hand to grasp, in hope,
the money bag, the silver swag,
and then, the knotted rope.