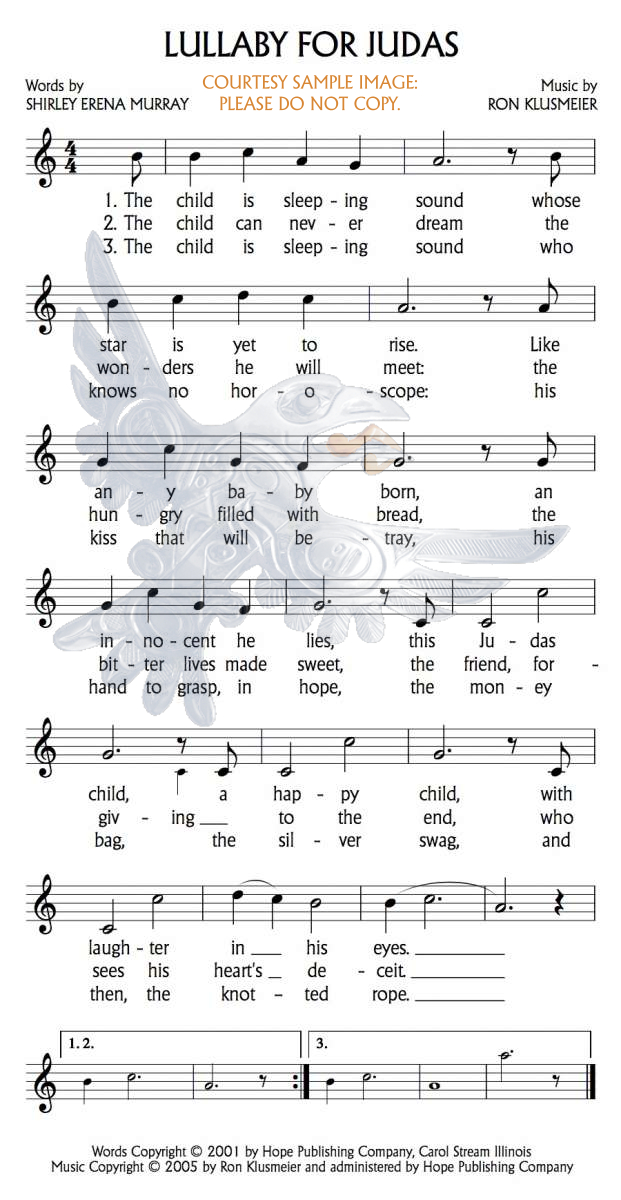 The child is sleeping sound
whose star is yet to rise.
Like any baby born,
an innocent he lies,
this Judas child, a happy child,
with laughter in his eyes.The child can never dream
the wonders he will meet:
the hungry filled with bread,
the bitter lives made sweet,
the friend, forgiving to the end,
who sees his heart’s deceit.The child is sleeping sound
who knows no horoscope:
his kiss that will betray,
his hand to grasp, in hope,
the money bag, the silver swag,
and then, the knotted rope.

The words are haunting, the tune wistful.

There are many lines in Scripture that are filled with pathos. I think of King David’s lament when word is brought to him that the forces of his rebel son, Absalom, have been destroyed and that Absalom himself has been killed. “Absalom,” weeps David, “Absalom, my son Absalom, would that I had died instead of you!” (2nd Samuel 18:31-33).

The story of Judas intrigues believer and unbeliever alike. His betrayal of Jesus and his subsequent suicide wounds the very heart of the small band of close friends and disciples – and that of the wider Christian community. Indeed, Judas is an archetypical person in the drama. He is, perhaps, the disciple who understands most clearly what Jesus is about, yet he misses the mark, misjudges and underestimates the extent to which Jesus truly sees God’s Love as central to all belief and all practice.

The thirty pieces of silver and the rumours that Judas had been pilfering from the believers’ common purse are perhaps inserted into the story by the interpreters because that makes it easier to characterize Judas as a misfit from the beginning. This explanation will be easier to live with rather than acknowledging how easily it could have been any of them, could be any of us, who would sell out by substituting a lesser goal than the New Day of God’s reign. It is the perennial temptation of those who would “play to the base” rather than speak truth, practice justice, admit complicity with evil. (It is ironic that playing to “the base” so frequently becomes not just solidifying the support of fans and true believers but also encouraging the baser motivations that “lie crouching at the door” of our hearts.) Judas is not pre-ordained to betray Jesus any more than each of us is pre-ordained to capitulate to any specific temptations.

John, the Gospel writer, records simply “So after receiving the piece of bread, he (Judas) immediately went out. And it was night.” (John 13:30). This is the first real fracturing of the community. At the high point of the community’s meal, there is a darkness that intrudes. There is a great sadness, and each soul there that night must have known it.

My parents had very close friends whose pre-adolescent grandson had been imprisoned for life for a dreadful act he had perpetrated. The youth’s place of imprisonment was in another province. Once (perhaps it was twice) in a year the grandparents made the journey to visit face to face with the grandson whom they otherwise kept in touch with through letters exchanged. It was a painful journey for them. I remember that my parents made sure they visited with their friends before each journey and visit, then again shortly after the couple’s return home. There could be no excusing or explaining what in that youth had gone so wrong. But he was their grandchild and they loved him. I never did know what the boy had done. What I did know was how deep love can be, and how wounded love can be.

Shirley Erena Murray’s “Lullaby for Judas” deserves our thoughtful attention. It is, of course, an after the fact, and an “after centuries of judgement and condemnation” reflection. In a world prone to dehumanize sisters and brothers we are called into a humanizing exercise. Lullabies are most often sung as we hold a child. They are designed to soothe, to bring peace, healing, a sense of security and well-being. They are echoes of a loving and embracing Godsong. Our gentle rocking of a child combines adoration, hopes and dreams, fears and anxieties – for the child, for us and for all who will act as parent, example, mentor for the child, for all children.

An Activity: Write a letter to Judas’ mother or father. A day (or two) after writing the letter spend some time reflecting on the activity and on Shirley Erena Murray’s “Lullaby for Judas”. What are your thoughts? Your feelings? Are there areas where you are experiencing a change of attitude?

Audio Sample for "Lullaby for Judas"

One Verse
sung by David Moddle