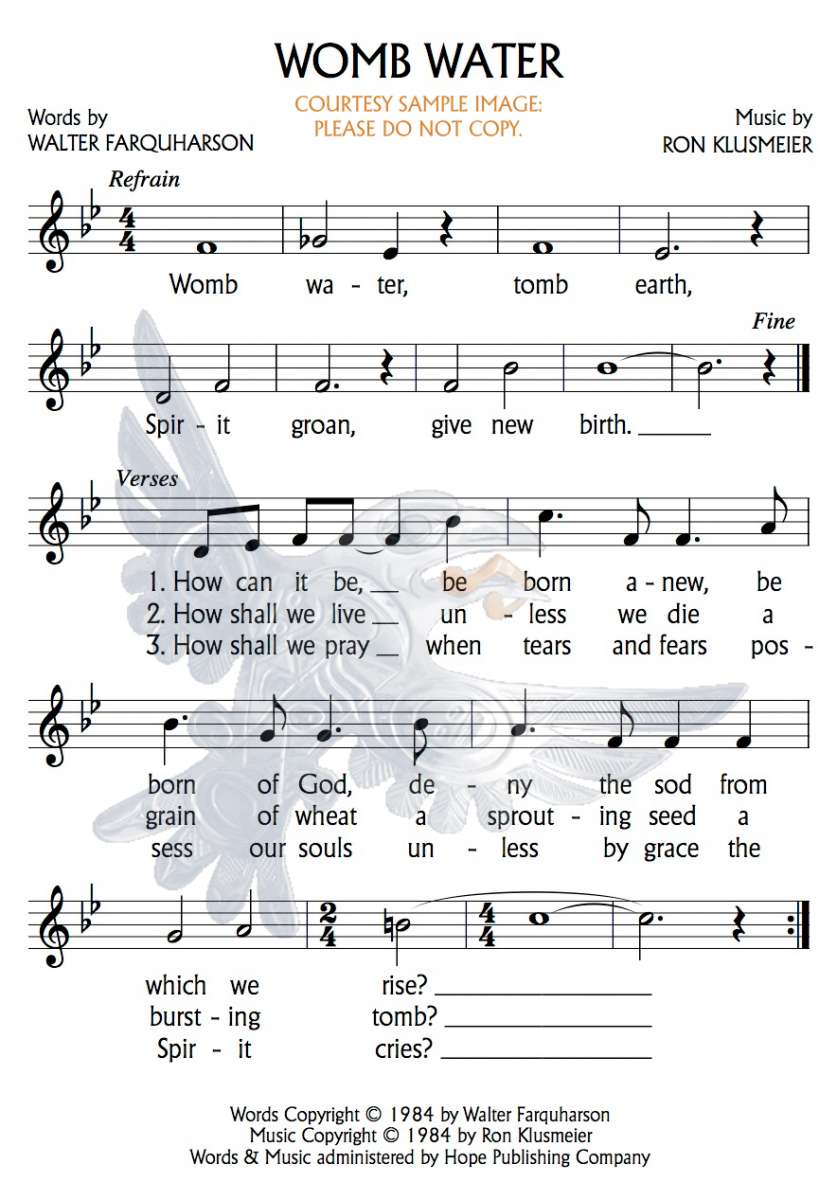 Womb water,
tomb earth,
Spirit groan,
give new birth.•How can it be, be born anew,
be born of God, deny the sod
from which we rise?

Womb water,
tomb earth,
Spirit groan,
give new birth.•How shall we live unless we die
a grain of wheat a sprouting seed
a bursting tomb?

Womb water,
tomb earth,
Spirit groan,
give new birth.•How shall we pray when tears and fears
possess our souls unless by grace
the Spirit cries?

This unusual combination of words is a compact package of human experience and Christian symbolism.

Before birth, we are cushioned by amniotic fluid in the placental sac. This is our protective environment. At death, we are buried, entombed in the earth. Even if our body is cremated, we eventually return to the earth from which we have come. Earthly life is sandwiched between the realities of birth and death. These realities speak of our finiteness, our limitation. They speak of the brief span that marks our days.

On a wider scale, we are part of nature and the endless cycle of birth and death. The created world births us, sustains us, and nurtures us. It sets the limits on our existence and draws the final curtain on the drama which was our life. Communities and even empires are born, mature and die. Out of this we cry for meaning, purpose, destiny.

We belong to a curious species of questioners, thinkers, worshippers. We consciously create and consciously destroy. We choose and, in choosing, alter nature and our history. Nobility crowns us, yet in degradation we foul our own nest.

Paul affirms that when we cannot pray, when reason and faith have run their course and we are empty, even then the Spirit, God’s own Spirit, groans within us. This Spirit in us, from us, cries out to God for our wholeness and integrity.

The symbolism of baptism is present as well. The waters of baptism are the new womb waters. We are buried with Christ in order that we might rise, a new being, in Christ. The waters are also the tomb from which God calls us. “You must be born anew,” Jesus said to Nicodemus. “How can that be?”, he replied. “Can a grown man re-enter his mother’s womb and be born again?” In response, Jesus asserts the necessity of being born of water and the Spirit. The reference to baptism is clear.

In the book of Jonah, we meet a reluctant prophet who, having been thrown overboard while in flight from God, is swallowed by a big fish. While in the belly of the fish, Jonah is surrounded by waters of turmoil and doubt. He feels betrayed and forgotten. When God speaks, he is reborn and recommissioned. He accepts the charge he had originally been given.

The Hebrews, captive in Babylon after the fall of Jerusalem in 587 BC, must have known that agony. God speaks; and there is new life, liberation. Delivered from captivity, a servant people seek their role in God’s purposes of wholeness and health for all people.

Prayer leads us into unexplored truth. The image of womb water recreates in my mind some neglected images of God. God carries us as a mother carries her unborn. God suffers the pangs of birth as a people are called into being. God provides us the spiritual milk by which we grow up to salvation. The nature of God is known in what God does.

Having named the reality of human existence, in the repeated refrain of this hymn we call on the Spirit of God. We seek the Spirit’s activity and our subsequent rebirth. Again and again in our life pilgrimage we will need to die. It is in our dying that we will discover the life called forth by God’s grace. Conversion happens many times as God’s purposes are carried out in us.

The birthing of a poem/hymn

It was late at night and exceptionally dark. I was driving on what seemed an empty highway and there were few farmyard lights to be seen. I was not aware of thinking about anything other than the road in front of me and the possibility that a deer or other creature might suddenly emerge from the ditches on either side of the road.

Then I realized that I was repeating aloud these two simple phrases, “Womb water. Tomb earth.”

I pulled to the side of the road, located a pen and on a paper napkin wrote down the phrases before they escaped. The next day the words would work within me.

Life is conceived and first nurtured in darkness. One day we die and will become one with the earth. I remembered my Dad’s frequent use of the Latin phrase tempus fugit. Time flies. The term intentionally annoyed a procrastinating son. And, it still does. I also recalled my Grandmother Catherine’s repetition of the first line of an old hymn, “Brief life is here our portion”. For her this was not an abstract thought. Her mother had died when she, Catherine, was nine years old. Her two-year old baby brother died a year later. Three of her younger sisters died before any of them, or Catherine herself, had reached the age of thirty. Her oldest son died in the trenches in World War I, her husband just two years later of the Spanish flu. The last of her sisters, the one who had immigrated to Canada with them in 1922, succumbed to cancer less than ten years later. Brief life. It has been reality for so many, over so many ages of human history.

Verse One of the poem hymn reflects the story of Nicodemus in John’s Gospel, chapter 3. The second echoes Jesus word’s about his own death as John has recorded them. The third verse takes us to Paul’s affirmation of the Spirit groaning within us even when we have no words – or even coherent thoughts – with which to pray.

Reading from John’s Gospel about the raising of Lazarus (Chapter 11) invites us to enter a reality that we may find much more personal and real than we would have believed possible for us. That may depend on whether or not we can free ourselves from literalistic analyses in order to enter an existential and spiritual experience.

Reflecting on the story of Lazarus, I wrote in “An Audacious Invitation”, these words:

“At the heart of it all [the Lazarus story] is mystery characterized , not by magic or spectacle, but by an unmanageable love that cannot be left wrapped in cloths of death. Love hears the call to unbind what is bound. Deep within the recesses of our being, we, and our world, hunger to know, experience, and live that which is holy and true. That hunger must be stirred to life, not once for all, but again and again.

“My Lord, he calls me. He calls me by the thunder. The trumpet sounds within-a my soul. I ain’t got long to stay here.” This spiritual, rooted in the experience of black Americans, echoes the story of Lazarus. It may speak of death and finding freedom in the arms of Jesus, released from the pain and injustice of slavery. It is also call to freedom and an end to a people’s bondage.”

From “AN AUDACIOUS INVITATION”, pp 145-146
by Walter Farquharson and Jeff Cook 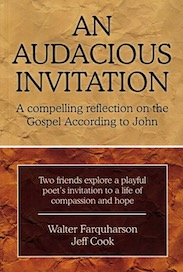 An Audacious Invitation
(A compelling reflection
on the Gospel
according to John)
is available from:
Walter Farquharson
Box 126
Saltcoats, SK   S0A 3R0   Canada