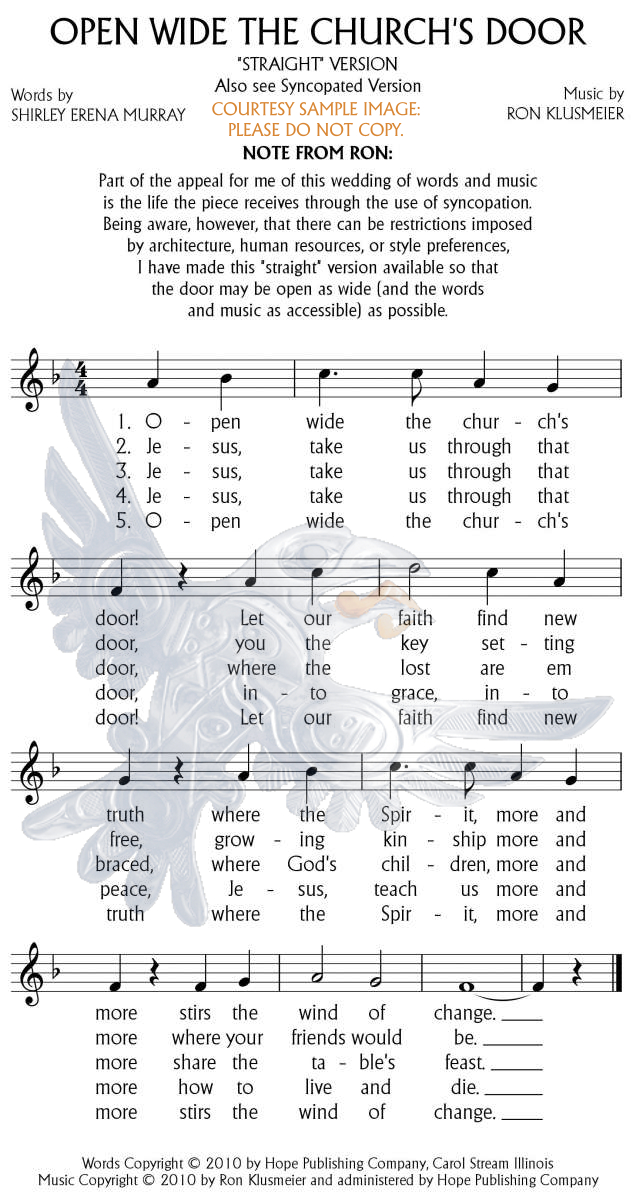 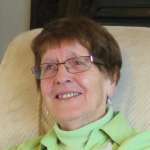 ”I first titled this a ‘Hymn for a Dispirited Church Community’ due to tensions in our local ‘Uniting’ Church about the procedures of ‘calling’ a new minister. Since then, I have realized that though I had imagined this particular door releasing church people into the real world of Jesus outside (see verse 2), it could easily be construed as inviting people inside!” 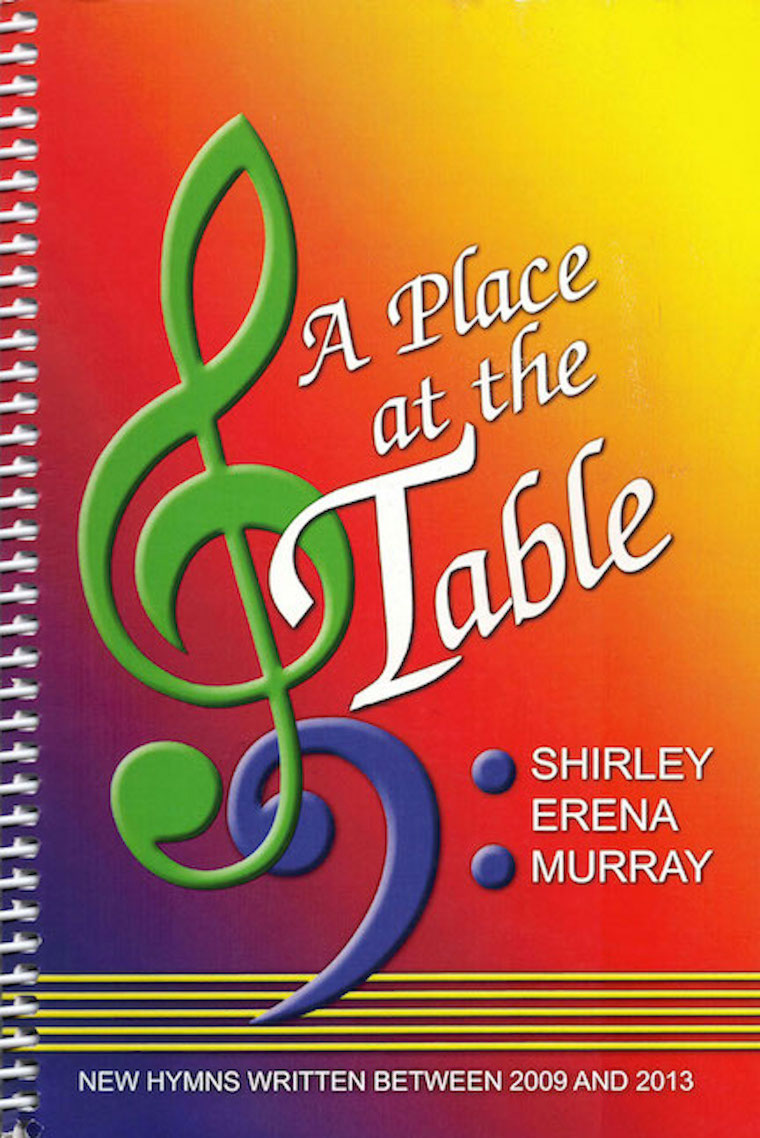 Ask most churchgoers if their church is a welcoming church and the answers will usually be something along the line of, “Of course!” Chances are also pretty good that the assertion will be followed by a rather suspicious, “Why? What have you heard?”

We know our churches should be welcoming places but we probably also know that how welcoming they prove to be will likely depend on how much the people being considered look, think, and act like most of the current attendees.

As we read and sing this hymn of Shirley Erena Murray’s, it is clear that she understands the church to be a place of transformation and a place where barriers are broken down and superseded by a new kinship that creates a community of inclusion, celebrates diversity and honours the gifts that each is empowered to bring to the community.

Too often when we have sung or spoken about opening the church’s doors we have been thinking of metrics of success – success in numbers, in the offering of attractive programs, in providing a cozy corner of belonging – often with little commitment to each other, especially to any that may come to feel burdensome.

There are sound reasons that fuel such things as the development of an ecumenical spirit that values different traditions formed by ethnicity, language, cultural gifts. Union movements, such as those which resulted in the formation of the United Church of Canada and other Union and Uniting denominations worldwide, were prompted and nurtured by the desire to avoid unnecessary competition and therefore a more efficient unity of mission and educational opportunities. Old separations came to be seen as barriers to gospel proclamation and service to community. Ironically it was sometimes easier to unite denominations than to bring together into one household of faith the folks from St. Andrew’s and from St. Paul’s, both firmly planted on the intersection of Church Avenue and Commercial Street.

It is clear in the gospels that Jesus was regarded as a Jewish teacher. He is referred to, or addressed, as Teacher, Rabbi, a Prophet. Could his followers include people of the Jewish faith and believers who were Gentiles (non-Jews)? Could it include Samaritans? Could Roman soldiers or officials access his ministry of healing? Was there space for doubters? Seekers?

It was all very well that Jesus disputed with religious leaders (and different sects within the Jewish leadership) and that he proclaimed that the whole of the law and the prophets was summed up in this – to love God with heart, soul and mind, and to love one’s neighbour with the same intensity. The early church struggled with issues of circumcision/uncircumcision, Sabbath requirements, dietary laws, obligations to family, loyalty to or opposition to Rome. A host of ethical and moral issues would need to be met, deliberated upon, resolved in particular circumstances.

References to all of these concerns can be found within the pages of the gospels. None of the issues are resolved to the satisfaction of the purists. That should not surprise any of us. We note that harsh words are spoken by Jesus – addressed to the “hypocrites”. The hypocrites were not those who failed to live up to their own proclamations but rather were those overly (hypo) critical of others, often obsessing on details (for instance dietary rules or matters of sexual behaviour ) while choosing to ignore weightier matters of justice and compassion. “Straining at a gnat while swallowing a camel.” Too often the church, in many different manifestations, has found it easy to excommunicate, banish, shun, bring to judgement, close the church door against some while overlooking the most heinous sins and crimes of others. Race, gender, orientation, ethnicity, creed, social customs, have all had their day as some in authority exercised power in the name of God over those they deemed godless and immoral.

The gospels tell of those with whom Jesus kept company, ate, travelled. There are stories of outsiders being blessed with healing, those deemed “sinners” offered forgiveness and dignity, and those who sought God’s truth being honoured in their questioning (like Nicodemus and like the Samaritan woman at the well).

“Open wide the church’s door”, sings out Shirley Murray, “Jesus, take us through that door where the lost are embraced, where God’s children, more and more share the table’s feast.” The why, how, and for whom of the church’s doors being opened wide are all answered as we see that Jesus is the key that can open the doors wide. He is the one inviting, kneeling to wash the feet of his disciples, breaking the bread and distributing it with generosity. “Do as you have seen me do,” he tells his followers.

We have been welcomed and are graced to become part of the welcoming. “Jesus, take us through that door, into grace, into peace; Jesus, teach us more and more how to live and die.”

An Exercise: Cartooning can often get us to places of truth we would otherwise avoid, miss, or censure. Individually, or in a group, sketch some cartoons about church doors indicating who might be welcomed and who might be left standing outside.