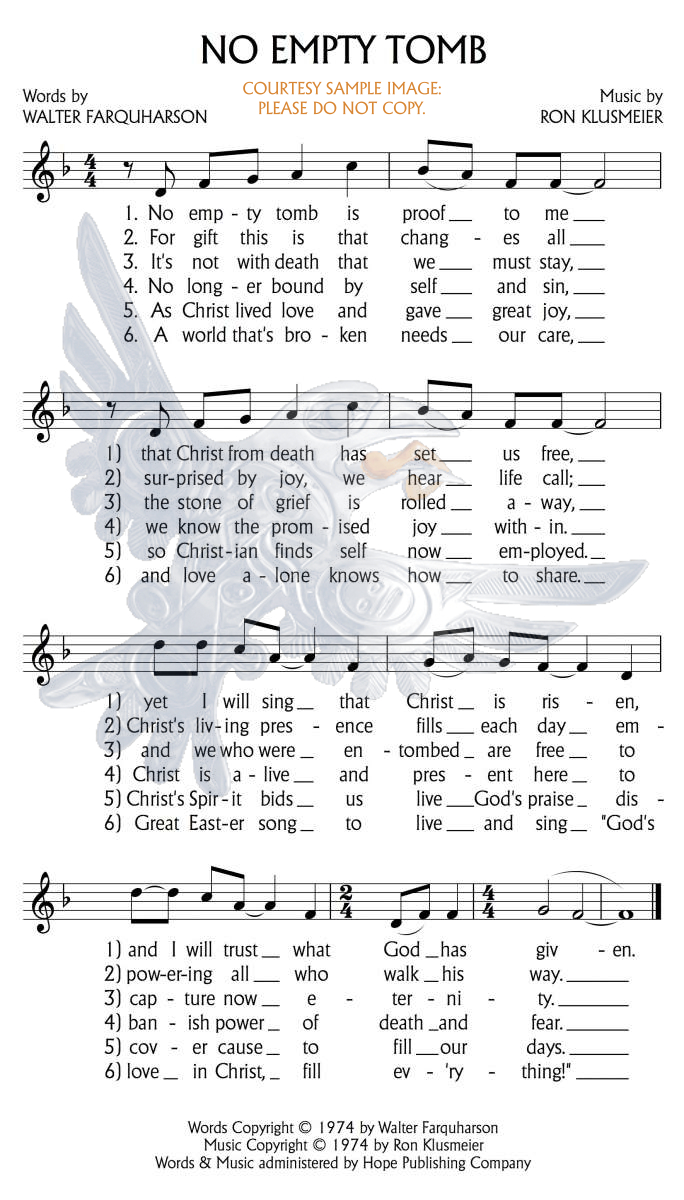 No empty tomb is proof to me
that Christ from death has set us free,
yet I will sing that Christ is risen,
and I will trust what God has given.

For gift this is that changes all
surprised by joy, we hear life call;
Christ’s living presence fills each day
empowering all who walk his way.

It’s not with death that we must stay,
the stone of grief is rolled away,
and we who were entombed are free
to capture now eternity.

No longer bound by self and sin,
we know the promised joy within.
Christ is alive and present here
to banish power of death and fear.

A world that’s broken needs our care,
and love alone knows how to share.
Great Easter song to live and sing
“God’s love in Christ, fill everything!”

This hymn was written as my personal response while planning an Easter service. In it, I was suggesting that the real proof of Christ’s resurrection lay for the disciples not in the empty tomb, but in Christ’s living presence. Without changed and changing lives, the empty tomb is only a curious insertion into the story.

Early opponents of the Christian faith tried to discredit the movement by ridiculing or questioning the resurrection stories. The body was stolen, they said; Jesus was only in a coma when removed from the cross; someone else took his place on the cross. These explanations failed, not because irrefutable evidence of a physical resurrection could be produced, but because it was noted, “See how these Christians love one another.”

The ringing reality of resurrection is found in love-filled women and men moving to reconcile and heal an alienated world. Individual lives are changed. Basic community is changed. Attitudes to resources, politics and economics are changed. Old divisions are shattered.

NO EMPTY TOMB
One Verse
played on piano by Ron Klusmeier

This sample also includes an optional 2-measure bridge which can be used as an ending. There is a variation of this bridge with a slightly different progression included with the piano accompaniment which can be used between verses.