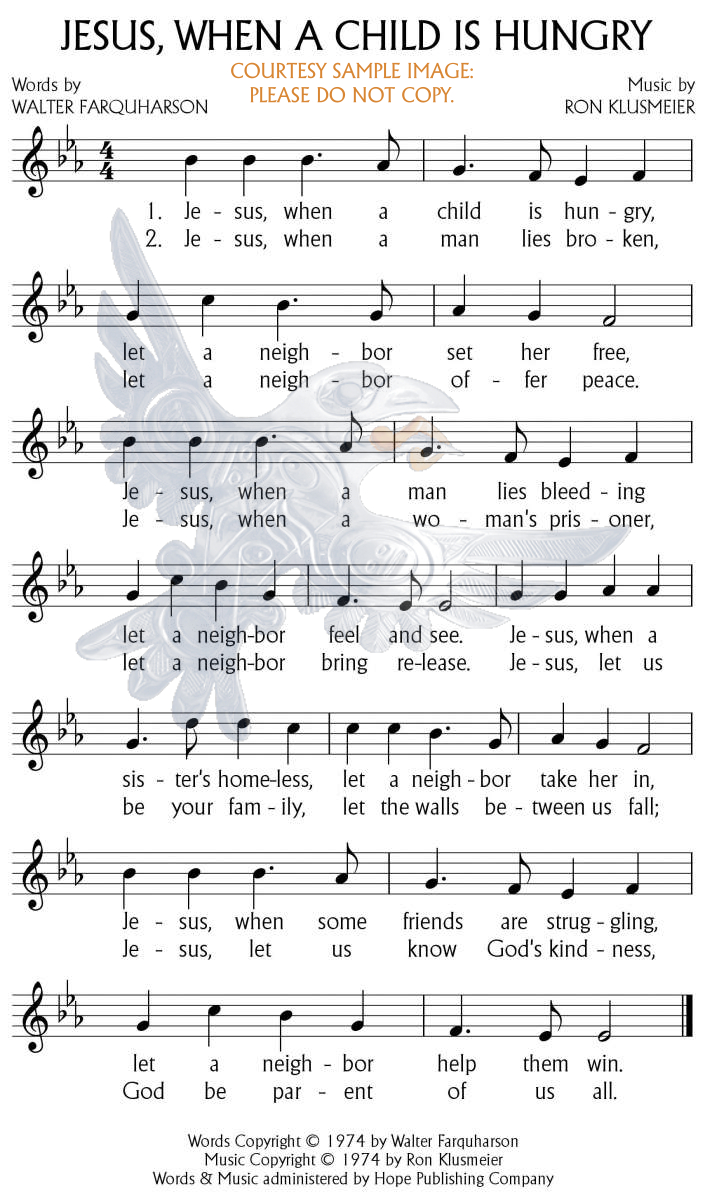 Luke, alone of the gospel writers, includes in his narrative Jesus’ parable of the good Samaritan. For almost 2000 years it has proven one of the most compelling of the parables. Many who use the phrase, or know the meaning of the phrase “good Samaritan” would have no idea where it comes from or that it based on a parable told by Jesus.

In the parable, Jesus makes it clear that the neighbour was the one who did not pass by the man lying robbed and beaten in a roadside ditch. While others passed by, the good Samaritan was the traveller who had compassion on the man left in the ditch to die. The Samaritan stopped to help and he saw not only what was required in the moment but also beyond the moment.

Charity without compassion sees only partially. Such charity involves no commitment. It lacks the willingness to see the humanity of the one needing help.

This hymn on a first reading may seem simplistic. It may look like a listing of those who might need our help such as we might make on a flip chart or whiteboard. This prayer hymn is intended to help us go deeper and prayerfully into our call to a discipled follower of Jesus.

The first lines say “Jesus, when a child is hungry, let a neighbour set her free.” The neighbour sees the hungry girl, is moved by compassion, hopefully helps her find food. But the neighbour also sees how hunger imprisons. The search for justice will name that disempowering captivity and will, in solidarity with the girl and her community and other partners, seek ways to change what otherwise could remain a hopeless situation.

A few years ago, Joan and I were guests in the home of a couple who were much involved with their church’s program of providing meals for some of the community’s homeless and financially strapped. Our hosts were embarrassed that some who helped with the program would water down the soup or shortchange the amount of meat put into the stews or meat loafs. These same volunteers tended to speak of “these people” and to see them through rather judgmental lenses. Our hosts celebrated the volunteers who engaged in conversation with those among the meal guests who were open to talking. Some found ways of helping job seekers find employment. Others acted as advocates for those needing assistance to get through blocks encountered in one system or another. The volunteers who saw the humanity of those coming for meals tended to fortify the soup or stew with extra meat and vegetables.

When visiting partner churches in South Africa during my term as Moderator of the United Church of Canada, Joan and I had the opportunity to meet Nico Smith and to talk with him about the program he was part of just outside Johannesburg. Nico Smith had been a minister in a strictly segregated denomination. He told us of how when he began working among blacks in a neighbouring township there were doors of family and friendship that closed against him. As his work became more engaged and engaging, his denomination closed down his “mission work”. Nico told how he had at first lived close to the black community but drove in and out of it as minister. “I began to see,” he said, “that to minister in Jesus’ name I had to minister with, not to the people. I sought their approval to move into their community and we were graciously welcomed. Eventually we began the program of koinonia (the Greek word used in the Christian Scriptures and often translated ‘fellowship’ or ‘community’). At first,” he said, “we just invited one white household at a time to come into the settlement and for one evening share the hospitality and welcome of one black household. Attitudes began to change as we learned of each others’ humanity. And,” with an impish grin, he concluded his story, “the Christian church has an ancient tradition of meeting at the table and there finding healing, forgiveness and freedom.”

Amongst other things, this story of Nico Smith reminds us that the struggle for justice is important but often its beginnings are small and may seem inconsequential. It is important not to disparage or judge sincere attempts to reach out to neighbours.

Several people have asked me if the last two lines were a misprint, or an error. The answer is, ”No, the phrasing is very intentional. God is parent of all, but the prayer is that we may come to a true knowing of God’s kindness and the reality that God is parent to all. It is when we come to that place of acknowledging that we can change and see our world and our neighbour in a new light. Knowing that the barrier preventing me from truly being a neighbour is often within me – my heart, my assumptions, my prejudices, my fearfulness can become an important new beginning.”

"JESUS, WHEN A CHILD IS HUNGRY"
One verse played on piano