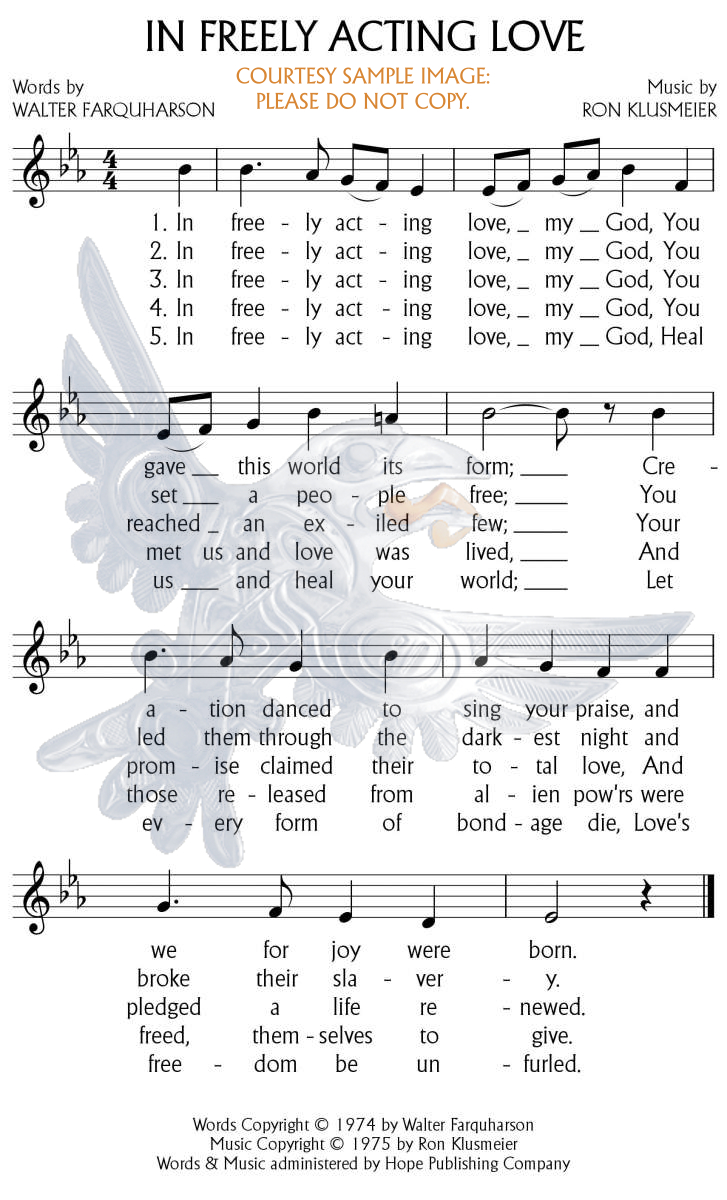 In freely acting love, my God,
You gave this world its form;
Creation danced to sing your praise,
and we for joy were born.

In freely acting love, my God,
You set a people free;
You led them through the darkest night
and broke their slavery.

In freely acting love, my God,
You reached an exiled few;
Your promise claimed their total love,
And pledged a life renewed.

In freely acting love, my God,
You met us and love was lived,
And those released from alien powers
were freed, themselves to give.

In freely acting love, my God,
Heal us and heal your world;
Let every form of bondage die,
Love’s freedom be unfurled.

The faith to which the Bible witnesses is not an intellectual belief. It is a living, trusting, relating reality in which we are called to ‘live and move and have our being’.

Dr. Robert Schnell, my professor of old Testament (1957-60) at St. Andrew’s College, Saskatoon emphasized that a prevailing description of God in the Hebrew Scriptures could not be limited to concepts but was always tied to being moved into action.

The dramas undergirding faith and faithful living were three: God creating, God liberating, God restoring the exiles. God acted out of loving kindness or, as is stated in this hymn, out of freely acting love. The actions become themes that inform and form the life responses and choices of the people. There is an inter-weaving of these movements. Each comes to be seen through the experience of the other two.

In John’s Gospel we are told, “In the beginning was the Word…”. The word becomes flesh and dwells amongst us, creating, liberating, restoring. The Scripture’s promise takes flesh in Jesus, in the Jesus people, in all who will receive the creative, liberating, healing life that is offered within this amazing freely acting love of God.

I strongly believe that the more abstract faith becomes, the more we talk about what we don’t believe or how sophisticated we are becoming in our interpretations of faith, the more irrelevant we become as the people of God.

Too easily we become not the reflection of God’s creating, liberating, restoring love and instead simply mirror the prevailing attitudes of whatever portion of society to which we happen to belong.

To believe in the freely acting love of God is to be engaged, commissioned and empowered. Partnered by the Spirit we become actual living beings. We say with our creating God “Behold, it is good”. We see with our liberating God who sees the suffering and oppression under which so many live. We proclaim as good news the restoration of peoples who will go out in joy and be led forth in peace.

"IN FREELY ACTING LOVE"
One verse played on piano