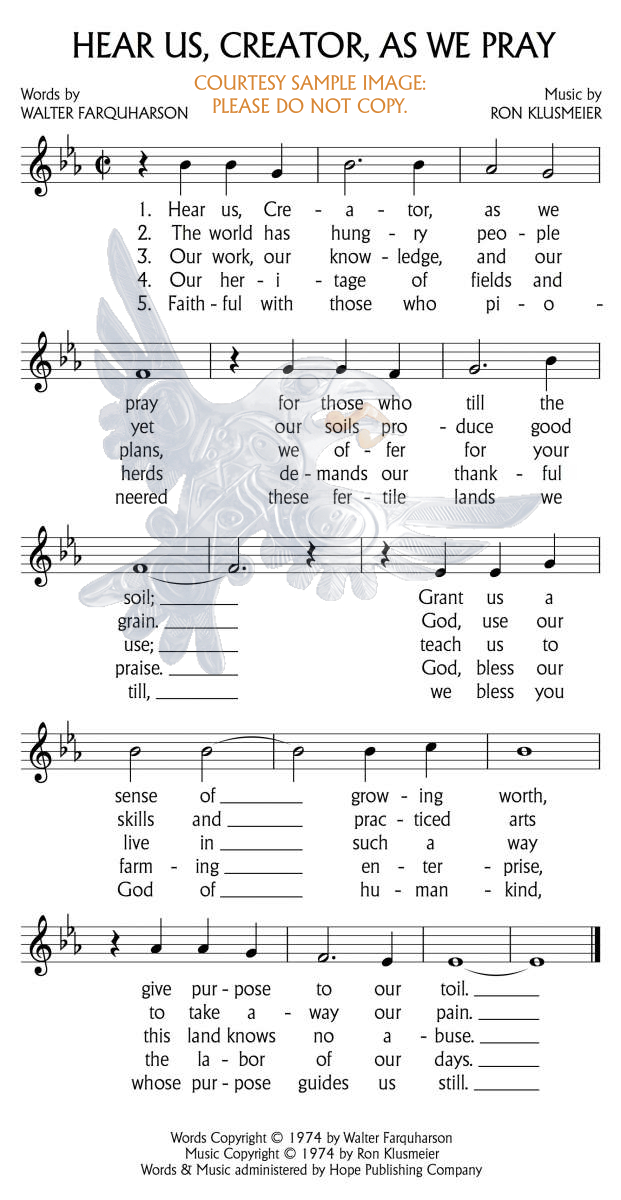 Hear us, Creator, as we pray
for those who till the soil;
Grant us a sense of growing worth,
give purpose to our toil.

The world has hungry people yet
our soils produce good grain.
God, use our skills and practiced arts
to take away our pain.

Our work, our knowledge, and our plans,
we offer for your use;
teach us to live in such a way
this land knows no abuse.

Our heritage of fields and herds
demands our thankful praise.
God, bless our farming enterprise,
the labor of our days.

Faithful with those who pioneered
these fertile lands we till,
we bless you God of humankind,
whose purpose guides us still.

My father was a farmer, for many years a grower of registered seed grain who partnered with the University of Saskatchewan’s College of Agriculture and with the Ministries and Departments of Agriculture in federal and provincial governments.

He loved the land, the experimentation that resulted in varieties of grain that were more disease and pest resistant, the community of others like him for whom food production and stewardship of the land was indeed a calling.

He was a teacher and mentor, always ready to engage in conversation about farming practices, and desired outcomes. I often saw him run a handful of soil through his fingers reminding family members, neighbours, anyone with ears to hear, “This is not ours. All life depends on the care of the soils. It belongs to humankind, to the generations yet to come. It is not just another commodity.”

“Hear us, Creator, as we pray” was one of the first hymns I wrote. It was written for my parents and for other farm families like them. The congregations of which I was minister were largely made up of farm families. Many shared the values I, from childhood, had heard expounded and seen lived.

For several years our local United Church hosted a community service, close in time to the Agricultural Society’s annual summer fair. It was a service of celebration and a recommitment to the values that shaped community attitudes of stewardship, global awareness, partnership with the Creator of all.

Sadly, around the globe millions of people were dying of starvation, millions of acres of farmland were being threatened by natural disasters, climate change (not yet so clearly identified), corporate and plantation style farming, the mining of the soils, depletion of nutrients, loss of fibre, a lack of soil-building farming practices. A major displacement of peoples who had lived on the land for centuries was gaining momentum on many continents.

One of the great frustrations of farm families was that the Canadian government, like others in several ‘developed’ countries, devised a program that paid farmers to take land out of production. “The world has hungry people yet, our soils produce good grain…”

I often think of how pleased my Dad would have been to know of the role Ron and Christina have played as ambassadors for the Canadian Food Grains Bank and for the work done by that organization in helping farmers in so many places reclaim land, develop irrigation projects and once again connect with the land and live in partnership with soil, water, air.

"HEAR US, CREATOR, AS WE PRAY"
One verse played on piano