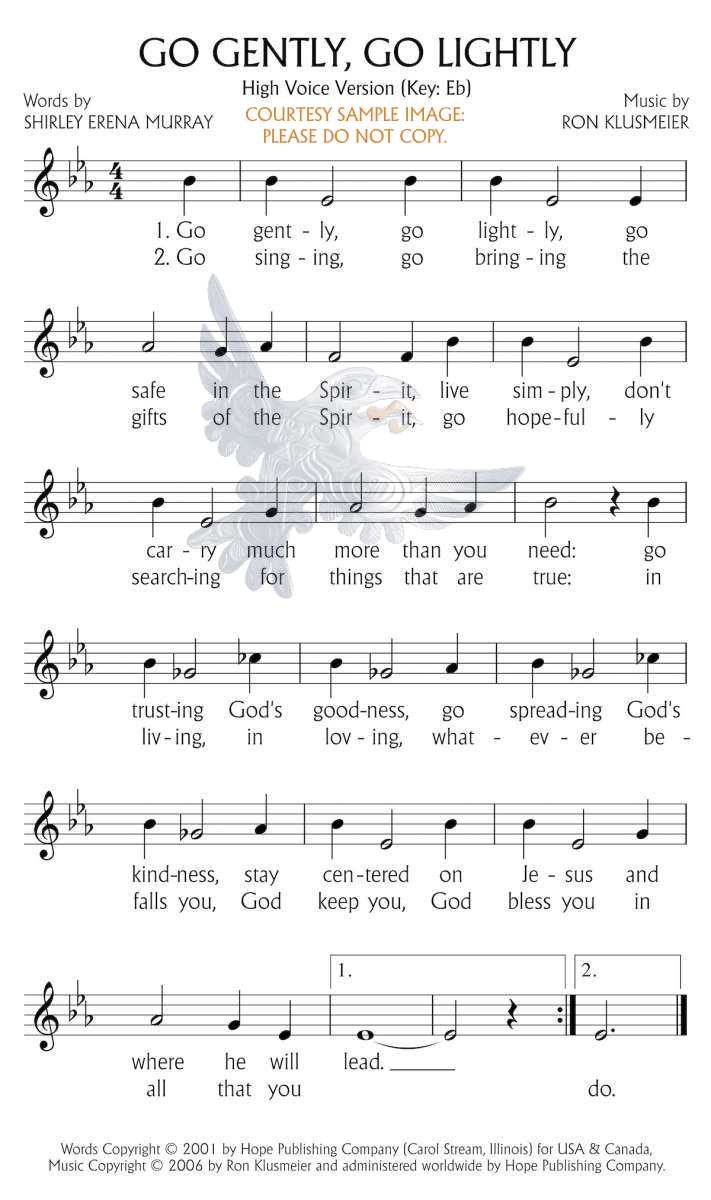 Go gently, go lightly,
go safe in the Spirit,
live simply, don’t carry
much more than you need:
go trusting God’s kindness,
stay centred on Jesus
and where he will lead.

Go singing, go bringing
the gifts of the Spirit,
go hopefully searching
for things that are true:
in living, in loving,
whatever befall you,
God keep you, God bless you
in all that you do.

Comment by
SHIRLEY ERENA MURRAY
from her book
“Faith Makes the Song” (#13):

“A ‘sending’ prayer for a good friend
setting out on a new career.”

As mentioned above, Shirley Erena Murray wrote this hymn as a “sending prayer” for a good friend setting out on a new career.

Our lives are filled with good-byes. We send family members and friends off with prayers and best wishes, and often advice, as they embark on a new phase of life, education, career, relationship.

Sometimes we know that this farewell may be our last time together.

Think of those in our own time, and those over the ages, who have left family and homeland behind – some as adventurers or as willing emigrants. Some have been exiled, displaced by war, famine or drought, rendered homeless by a tyrant’s decree or by an ambitious bureaucracy or by an expanding economic empire. It may be very edifying to examine our own family tree to see what stories are lying there waiting to be told and understood, and which will perhaps give us a new understanding of those living through similar situations in their own lives .

The Biblical story of Ruth tells a story of uprooting and of living in a new community and leaving that same community. Naomi hears Ruth’s assurance that she will accompany her mother-in-law as Naomi returns to her homeland and people. “Whither thou goest, I will go. Your people shall be my people…”. The reality of separation is given voice as Ruth bids farewell to Orpah, the daughter-in-law who will stay behind.

As we read the gospels we find many accounts of Jesus sending off his followers, or small groups of them, with particular instructions for specific missions. Those farewells echo words of assurance that they do not go alone but by the power and grace of a healing and community building God. There are words of counsel and words of warning. The first verse of Shirley’s hymn for a friend echoes many of the words Jesus spoke to his followers as they set off.

According to John’s Gospel, the words of Jesus spoken to his followers after they had finished the meal that was to be their last supper together, reminded them that it would now be their responsibility and opportunity to carry on the work he had begun. “Everything I have done, you will do.” In Chapter 17 we read Jesus’ conversational prayer to God speaking of all that would lie ahead for those disciples. We hear Jesus’ concern and anxiety, his assurance and hope, his trust in God and in those to whom the mission was now to be, in turn, entrusted.

Quite simply, each sending off is a commissioning. We head out with these words ringing in our hearts and souls:

“Go singing, go bringing
the gifts of the Spirit,
go hopefully searching
for things that are true:
in living, in loving,
whatever befalls you,
God keep you, God bless you
In all that you do.”

An Activity: Think of someone you have connection with and for whom you would offer a “sending off” prayer. Think carefully about them – and about what this “sending off” is likely to mean to the person and to others in their circle and beyond. Offer that prayer, “[Name], go singing, go bringing…”. Say the whole prayer aloud. Notice how the phrases take on specific and very real meanings. You might want to share some of your thoughts and Shirley’s words with the person you named so specifically.