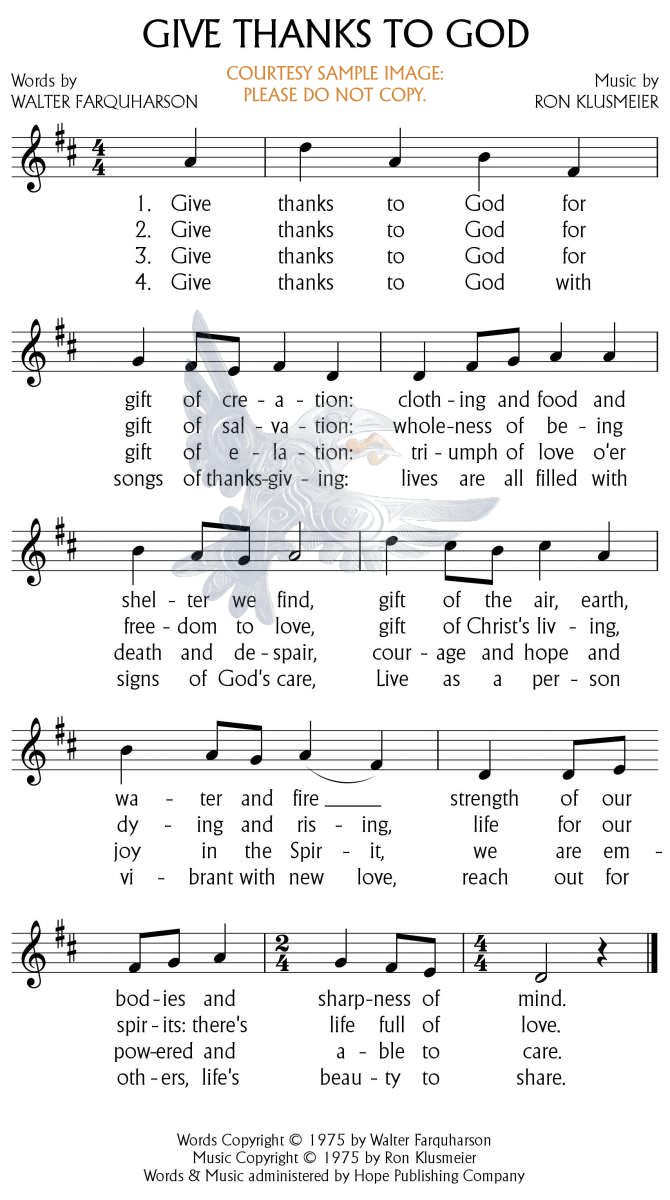 Give thanks to God for gift of creation:
clothing and food and shelter we find,
gift of the air, earth, water and fire
strength of our bodies and sharpness of mind.

Give thanks to God for gift of salvation:
wholeness of being freedom to love,
gift of Christ’s living, dying and rising,
life for our spirits: there’s life full of love.

Give thanks to God for gift of elation:
triumph of love o’er death and despair,
courage and hope and joy in the Spirit,
we are empowered and able to care.

Give thanks to God with songs of thanksgiving:
lives are all filled with signs of God’s care,
Live as a person vibrant with new love,
reach out for others, life’s beauty to share.

In Canada, we celebrate Thanksgiving as a harvest festival which tends to be a festival of plenty. A festival seen in this way limits it to a fortunate few of the world’s population.

The Castleton United Church congregation was made up of farm people. They or their families remembered the days of settlement and the joys and problems of pioneer living. More recent memory included the dirty thirties, a term applied to the depression years of the 1930’s which were complicated on the prairie by a succession of drought, grasshoppers and rust.

In the province of Saskatchewan, prairie meets parkland along a line stretching roughly from Lloydminster to Yorkton. Farmers of this area have known the wet years in addition to the years of drought. In those years, crops were seeded late and some harvests had to wait until Spring. Farmers also know that when the weather does cooperate, the markets often do not. Prices for commodities produced often lag behind the cost of production. To add further insult, there were good years when farmers were paid not to produce grain.

Traditional thanksgiving hymns tend to fall into two broad categories. The first group celebrates success, bounty, even excess. They have no room for crop failure, natural disaster, unjust prices. The second group uses the harvest scene as an allegory. The ‘real’ harvest is the harvest of converted souls won for Christ.

The Canadian Thanksgiving celebration lacks historical roots. It is in no way related to religious freedom or a celebration of hospitable native people. It could celebrate such things, but it hasn’t. Its focus has unabashedly been that of rich harvests.

I vividly recall standing behind the pulpit in that Castleton Church as the congregation sang, “All is safely gathered in, ere the winter storms begin.” Only a few bushels had actually been harvested. Sodden swathes of grain lay in the fields. Wet snow was falling even as we sang. “Never again!”, I vowed. Never again such carelessness over the words of our hymns. Had I said those things in a prayer or preached them in a sermon, reaction would have been immediate and angry. Such callousness would not have been tolerated. I suspect that the hymn was sung for the sake of its truthfulness in other years.

A farm accident claimed the life of one of my brothers-in-law, again right at Thanksgiving. Driven home to me was the ease with which we impose our thanksgiving joyfulness upon those who may feel they have little for which to be thankful. Our full baskets do not prepare us for lean years. They may, in fact, indict us for our callousness toward the plight of others.

One year at Saltcoats United Church, our children placed empty baskets around the communion table — a reminder that many come to the festival with empty baskets and, that in parts of the world, there are those amongst our human family who have never known a full or overflowing basket. The children brought pictures and articles to fill the baskets for sharing. A line from a hymn [“Now Join We To Praise the Creator”] by Fred Kaan says, “There can be no thanks without giving.”

We can celebrate creation and the intention written into creation that there should be food, clothing and shelter for the peoples of the world. We celebrate, too, the new life springing from Christ’s death and resurrection. That life is experienced as Spirit’s gift. In the Spirit, we are empowered, able to care.

Thanksgiving cannot be just a mood or feeling. It cannot stop with hymns and prayers. Life must change. And life does change if we live out of expressed gratitude. Vibrant with God’s love, we reach out to our neighbours with a willingness to share life. Such life is good and beauty-filled, by God’s intention.

"GIVE THANKS TO GOD"
One verse played on piano