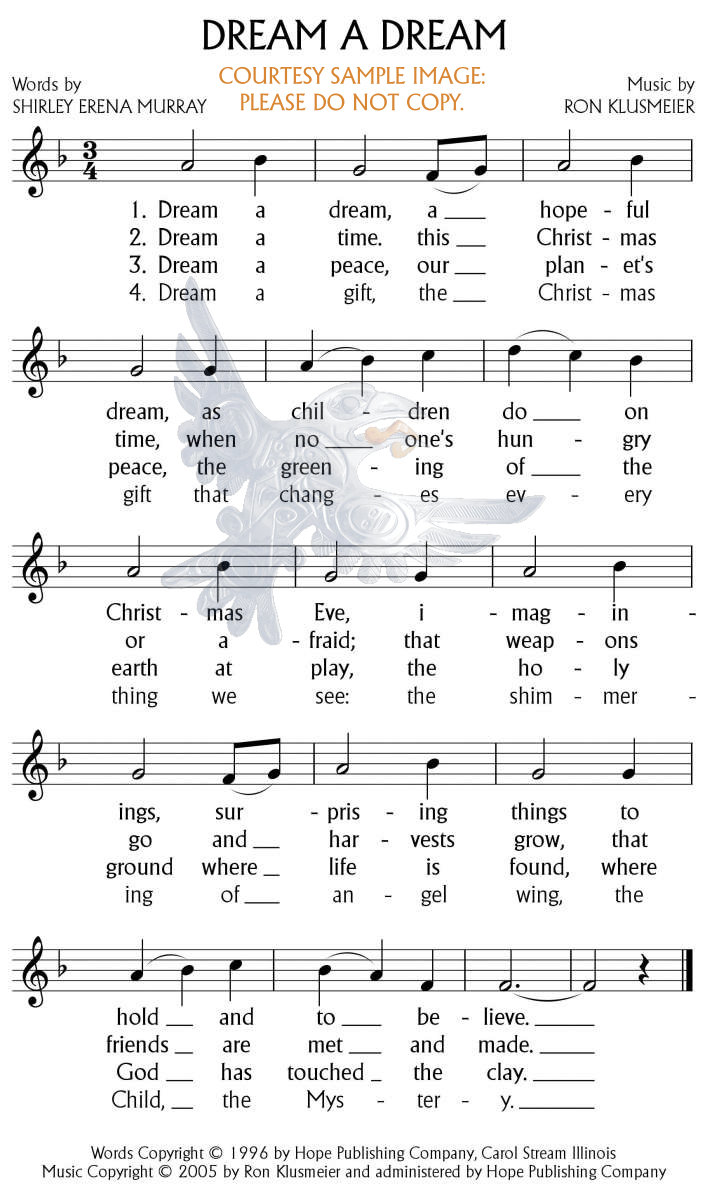 Dream a dream, a hopeful dream,
as children do on Christmas Eve,
imaginings, surprising things
to hold and to believe.Dream a time, this Christmas time,
when no one’s hungry or afraid;
that weapons go and harvests grow,
that friends are met and made.Dream a peace, our planet’s peace,
the greening of the earth at play,
the holy ground where life is found,
where God has touched the clay.Dream a gift, the Christmas gift
that changes every thing we see:
the shimmering of angel wing,
the Child, the Mystery.

Comment by
SHIRLEY ERENA MURRAY
from her book
“Faith Makes the Song” (#9):

“‘Carol of Dreams’ [Shirley’s sub-title for
‘Dream a Dream’] is one of two carols designed for a tune by Professor Peter Godfrey, who asked for a ‘grown-up’s’ version and one for small children.” 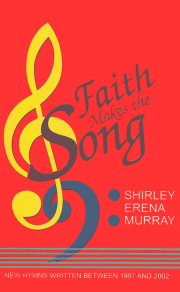 Sometimes we stumble on a truth that’s too important to forget. Playing with words is a great way to build vocabulary. I spent some of my growing up years living with my Grandmother and we passed many hours playing with words, rhymes and opposites, spelling matches, fun with mispronouncing words deliberately – like pronouncing antelope the way we say Penelope. Years later, playing with words one day in a classroom, I asked for words rhyming with ‘dreaming’. An eager student offered ‘scheming’. Not only did we have rhyming words but, in a profound way, we had discovered opposites! The opposite of dreaming is scheming!

Our world knows how to scheme. It is so much the way we function politically and often socially. Scheming is often grounded in cynicism, greed, and grabbing and holding on to power and influence. Survival in many arenas seems to demand that we learn how to become ever more proficient schemers. Recognized or not, scheming is often present and at work in our social groupings. Our churches are often captive to its poison.

The ancient story of Adam and Eve in the garden of Eden connects sin (separation from God) with self-serving scheming. There is scheming as the couple decide to eat of the forbidden fruit – the fruit from the tree of the knowledge of good and evil. There is scheming, however futile, resulting in Adam and Eve making themselves fig leaf aprons and deciding to hide from God – as if that was possible. Finally, Adam tries to cut a plea deal with the Creator by pointing the finger of blame at his soulmate. Soulmate in turn blames the snake. The snake of course was created by God so, wouldn’t you know, God is to blame for the screwups!

Think of how much scheming is designed to shift blame, to create villains, to put ourselves and our projects and our ideas in the forefront.

Coverup is treated seriously in many of the Biblical stories. Read about Elijah and his confrontation with King Ahab, or of the prophet Nathan and his dealing with King David because of David’s duplicity in getting rid of Uriah so that he can take Uriah’s wife, Bathsheba, as his wife. The prophets all speak out against the powerful and the political and religious leaders and their scheming. It is primarily in their hearts and minds that they have lost their way. As we read the gospels we are forced to remember how much of the opposition to Jesus rises out of the scheming of those with power and influence.

The Biblical imperative that counters captivity to schemes and schemers is the call to free the dreamers and visionaries and, within the life of the community and each individual, to liberate the capacity to dream. This call is not only to liberate the capacity to dream but also to activate the will to find place in the imagination, vision and dream of God. “I have set before you life and death, blessing and curse. Choose life that you may live.” (Deuteronomy 30:19)

Shirley Erena Murray’s gentle carol moves us into that space and time where we choose life. We choose blessing. That we can do this is itself good news. We are not held captive where all hope of freedom is lost. We are not captive to the exterior ills of a messed-up world, not are we captives of our own cynicism and frustrated schemings.

As we read the Christmas narratives in Matthew and Luke, and as we consider the message of the opening verses of the Gospel according to John, we are placed in the heart of God’s dream. Note that in the telling, being caught up in God’s dream describes so many of the characters in the drama – Mary and Joseph, Elizabeth and Zechariah, the magi, and later even Anna and Simeon in the temple. It is particularly in Mary’s song, the Magnificat, that we are reminded that God’s dream involves the bringing down of those who abused power and the lifting up of those whom the powerful had deemed did not matter, not worthy of either name or place. The dream is the dream of bread for the hungry, of goodwill or shalom amongst all people, of peace for the earth, peace all around. The impossible becomes possible when the dwelling place of God is in the midst of the people and in the hearts of people.

The gift we share at Christmas, and throughout the year, needs to be God’s dream and God’s encouraging of dreamers. The dream is to be nurtured in children. Everyone’s potential to help the dream along must be affirmed.

An Activity: Engage in conversations about dreaming God’s dream. Share stories about dreamers you have known. Ask children and youth what they dream for the world – for everyone. Choose one particular corner of your dream for the world, your angel song of peace on earth and true community among all peoples, and act on bringing it one step (or more) to fruition.