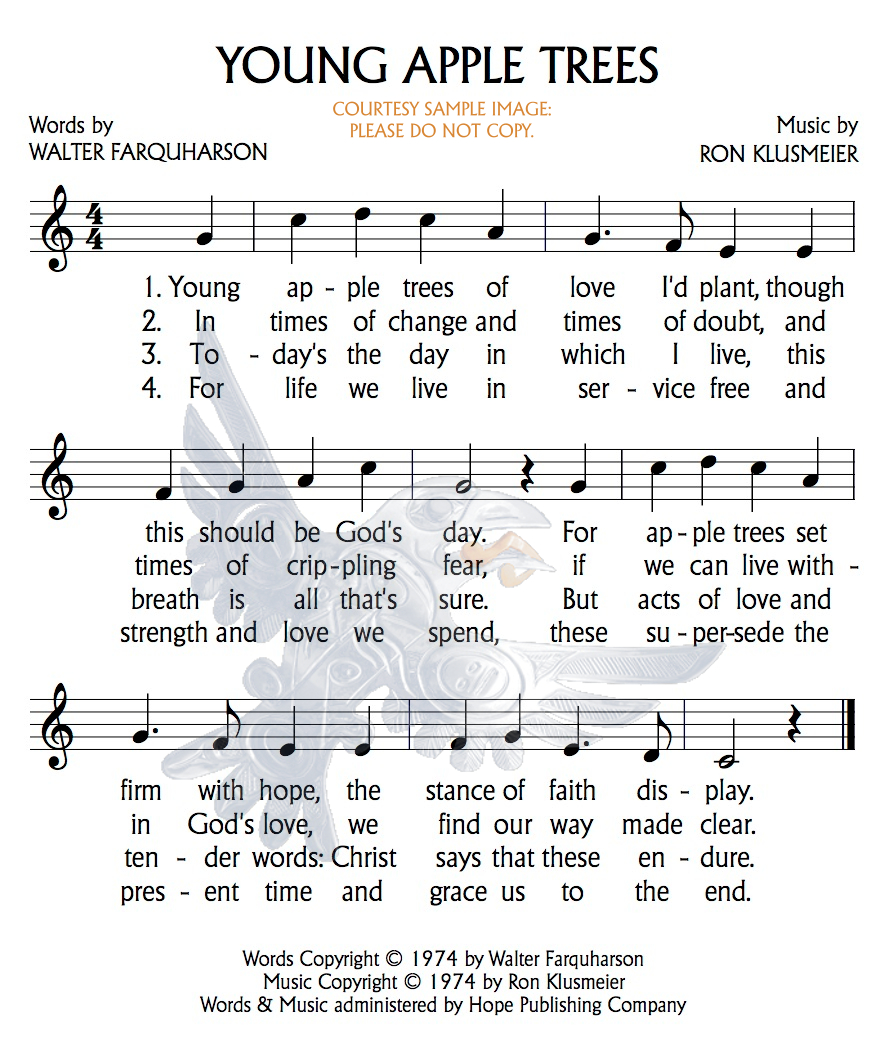 Young apple trees of love I’d plant,
though this should be God’s day.
For apple trees set firm with hope,
the stance of faith display.

In times of change and times of doubt,
and times of crippling fear,
if we can live within God’s love,
we find our way made clear.

Today’s the day in which I live,
this breath is all that’s sure.
But acts of love and tender words:
Christ says that these endure.

For life we live in service free
and strength and love we spend,
these supersede the present time
and grace us to the end.

Imagine a part of the Canadian prairies where there are no trees except for those that have been planted and carefully tended. The realities of life in that place are productive soils but limited rainfall, an ever-present wind and the immense expanse of sky.

A man, whose heritage is that of foresters and gardeners, plants yet another apple tree in the courageous oasis that is his prairie orchard. A small boy is initiated into the mysteries of earth stewardship.

The tiny sapling is held in immature hands while firmer hands spread the roots and fill in the earth around them. Strong feet further compact the soil around the tree. Words of love and encouragement are spoken, an earthy and earthly benediction is spoken and the tree is watered. How insignificant the act! How insignificant that tree against the earth, the sky, the wind. It will be many years before this tree’s place on the horizon will be marked by more than a few meters away.

With impatience, the boy greets the morning and hurries to the place where yesterday the tree was planted. It is still there, but it has not grown! It has not even leafed out. Only God knows if it lives. We must wait, and, waiting, treasure.

In its good time, in God’s good time, the tree grew, blossomed and ripened with fruit. The fruit was for savouring, for sharing with family and with friends. The fruit was a sign of courage and endurance, of patience, of God’s faithfulness.

The tree is now gone, its place reclaimed by prairie grasses. The man has died but his contributions to community and to prairie agriculture are not forgotten. The boy has grown and he, in turn, has planted apple trees with his sons and daughter. The method and the love remain.

I am the boy. For me, the planting of a tree is an act of faith and now it is also participation in the communion of the saints of God.

I purchased a small book that told the story of the Christian Church in East Germany as it sought to come to terms with the communist reality that surrounded it and threatened to overwhelm it following World War II. I read about many who were taking courage from a saying attributed to Martin Luther. Luther, who was often obsessed with thoughts of the coming ‘Kingdom of God’ and ‘Judgement Day’ was asked what he would do if he knew that tomorrow would bring that day. He replied, “I should plant my young apple trees.” We plant and live in faith. God brings our living, our world and our offering to fruition.

Despite the fact that we live in a world bombarded with the call to selfishness and self interest, we take our stands for justice; we do our acts of mercy. Like Luther, we can do no other. It is our call. It is our purpose. It is our destiny. We do what we do, we plant the young apple trees of love, because we are called to be God’s people, God’s family, God’s friends.

A NOTE REGARDING THE SAMPLE
AUDIO RECORDING ABOVE
To celebrate Walter’s 75th birthday, a small group of my church friends got together to create a very informal one-take, no-edits, recording of a few of the many titles on which he and I had collaborated over the years. We were an all-ages, ecumenical group. Some sang parts, some sang unison, some simply closed their eyes and listened. We were a very authentic 'pick-up-choir/congregation'! "Young Apple Trees" was one of the selections burned onto a one-off 'Happy Birthday, Walter!" CD which was sent with much affection to my writing partner and friend.