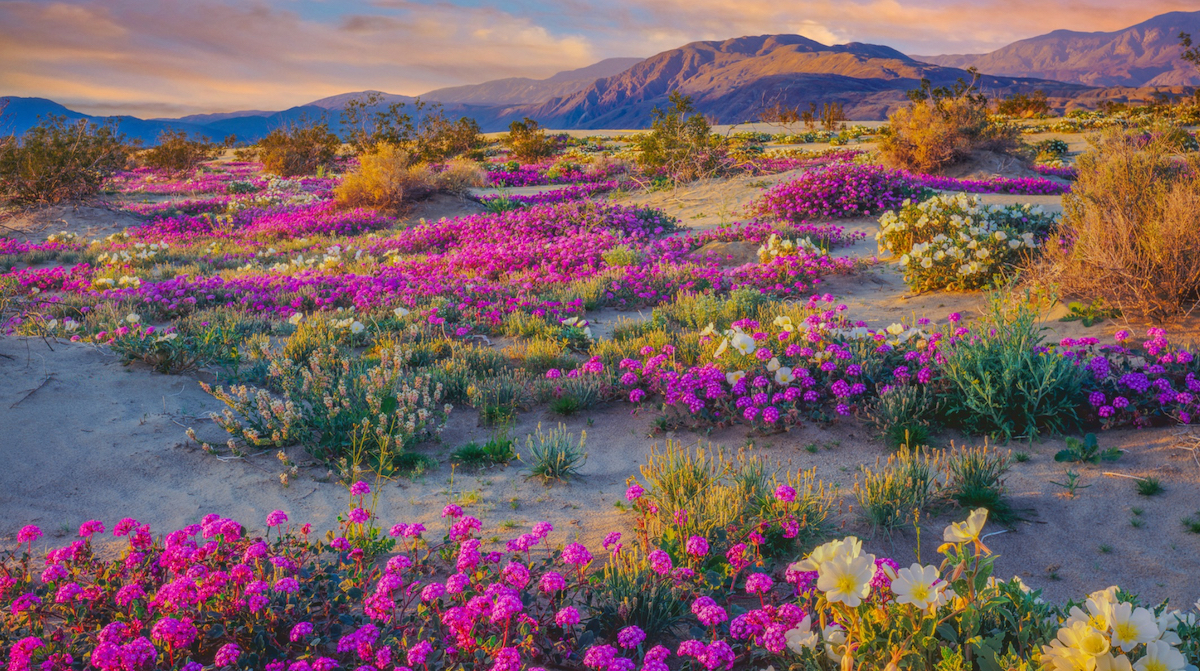 I have often thought about the wonderful metaphorical imagery of flowers growing in the desert. People who have witnessed the ‘explosion’ of desert flowers as a super bloom, a predictable seasonal event, or following an unexpected rain nearly always find it difficult to adequately explain the experience in words or satisfactorily capture it in photographs.

From Walter Farquharson’s reflection on his words as found in the “Comments on Song” section:

“As a boy I saw Walt Disney’s film The Living Desert. Spectacular photography captured the transformation of seemingly barren landscapes when life-giving rains and flowing streams called forth a new and vibrant world.”

“Years later I would hear Connie Kaldor, Canadian songwriter and performer, proclaim ‘Spring on the prairie, it comes as a surprise. One minute there’s snow on the ground, the next there’s sun in your eyes!'”

“Anyone who has lived in a climate where short or long periods of drought are reality knows how the first drops of rain give rise to hope, to gratitude, to commitment to participate in the newness that is offered.”

My friends, Jim & Jean Strathdee, lived for a long time in a part of California’s high desert country. I don’t think I will ever forget driving from their home to Los Angeles for an event we were doing together. The route took us through an absolutely stunning panorama of newly bloomed desert flowers. We stopped our cars and stood in silent wonder. When Jim & Jean named their publishing and recording venture “Desert Flower Music”, I totally got it!

Shortly after I created the music for “Flowers…”, I was offering a concert in Newcastle, New Brunswick (now, along with Chatham, a part of Miramichi). Near the end of the concerts, I would almost always respond to invited questions or comments from those gathered. On this night, a man stood up and noted that a few nights earlier he had been at my concert in St. John where we had sung this new song together about flowers and desert. “I’m just wondering why you didn’t do that one tonight.”

The community was being terrorized by a cruel, savage murderer who had escaped from custody and had returned to his hometown area to extract revenge — revenge which included the brutal murder of a priest in Chatham a few nights previous. A keen woodsman, he would sneak into town at night where he would break into homes, set them afire, beat and sometimes kill his victims. Although I had suggested cancelling the concert, the incredibly brave and defiant people from the churches which were sponsoring the event responded with an emphatic “No!”. If I was willing to come, the concert would go on.

I explained to the man who had raised the question that, indeed, the song had intentionally been omitted since I felt it would be insensitive to sing the second verse given all that was happening. He gently looked my way and said, “My friend, you may have written the music, but you don’t understand the words.” Gesturing around him, he extended his arms wide saying, “We are the captives who need to be set free. Now… can we sing that song?” And so we did.

For more about the text (including thoughts on “prisoners being set free”) and information about how the words flowed through Walter from Isaiah, refer to his comments about the song.

Flowers will bloom in the desert,
and enemies learn to be friends.
God’s world will be filled with God’s being,
will welcome the One that God sends.

The hungry will feed at the banquet,
the blinded be able to see.
All captives will walk out of prisons,
surprised at their call to be free.

The poor will know good news is spoken,
their value affirmed by their God.
The crippled will dance with God’s praises
and lilies shall burst from dead sod.

These promises, God, you have given,
your people have nurtured this dream.
In Jesus you call us to action,
you hold us in highest esteem.