The Raven which resides on the homepage was created by Leanne Helin, a Tsimshian Native artist and friend who resides on Vancouver Island. This three-dimensional symbol of Ron’s work has been a companion for many years and has travelled with him from coast-to-coast, usually perched on or near the piano as he shares his music.

Depending on your screen size, Raven appears approximately life-size on the homepage. It was hand cut, shaped and carved from a solid piece of silver with copper notes carried in its beak to be released and given life. Look closely and see within the body and wings symbols of music and spirituality.

Leanne writes the following about her creation:

The Raven was the first symbol and crest of the Northwest Coastal Indians. As the Creator’s assistant, Raven helped to create all things that exist. This mystical bird is a symbol of prestige—a cultural hero. Ravens are known for their amazing mimicry of sounds and speech.

This symbol was chosen for Ron because he is a creator of musical gifts—transforming notes into melodic sounds that transcend language barriers and, with Raven’s help, are lifted off the page to be given life and to soar into creation.

It was a pleasure to design and carve this one-of-a-kind symbol of Ron’s creativity. —LH 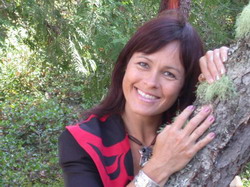