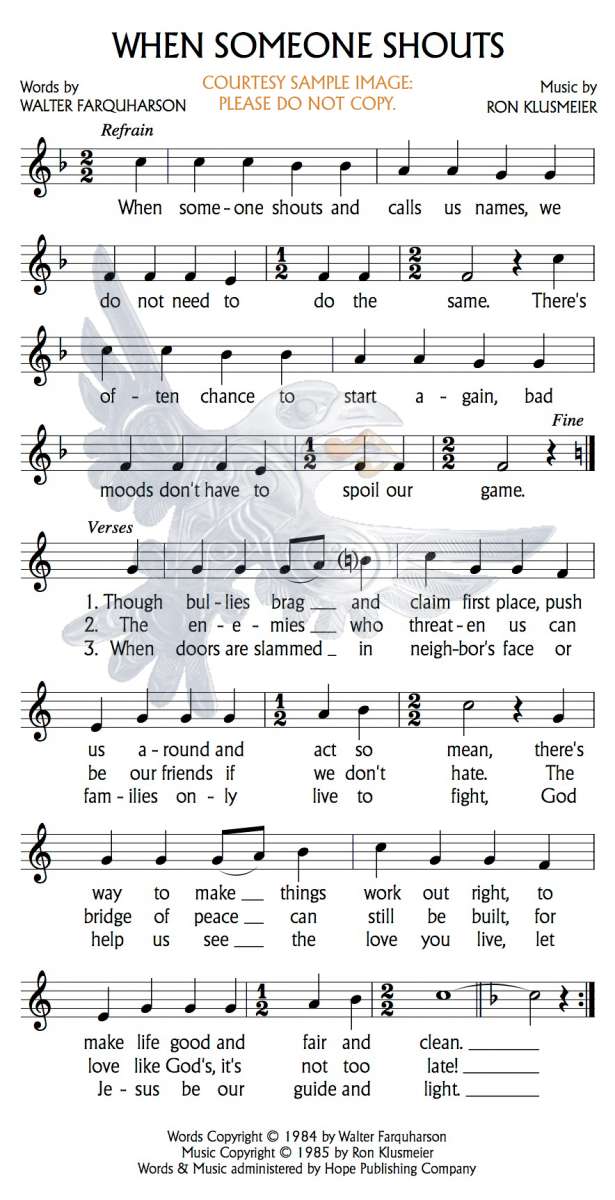 When someone shouts and calls us names
we do not need to do the same.
There’s often chance to start again,
bad moods don’t have to spoil our game.•Though bullies brag and claim first place,
push us around and act so mean,
there’s way to make things work out right,
to make life good and fair and clean.

When someone shouts and calls us names
we do not need to do the same.
There’s often chance to start again,
bad moods don’t have to spoil our game.•The enemies who threaten us
can be our friends if we don’t hate.
The bridge of peace can still be built,
for love like God’s, it’s not too late

When someone shouts and calls us names
we do not need to do the same.
There’s often chance to start again,
bad moods don’t have to spoil our game.•When doors are slammed in neighbor’s face
or families only live to fight,
God help us see the love you live,
let Jesus be our guide and light.

When someone shouts and calls us names
we do not need to do the same.
There’s often chance to start again,
bad moods don’t have to spoil our game.

If you are a person that has been teased and bullied, or have been part of a group that segments of society felt were fair game for nasty stereotyping and denigration, you probably had insult added to injury when told “Sticks and stones can break my bones, but names will never hurt me.”

It’s surprising – or maybe not – that so little attention has been paid to Jesus’ comment about name calling when he basically equates it with murder, uncovering a motivation most people would deny when confronted with their use of abusive language.

In the Greek New Testament the word translated as “You fool” is Raca. The word is not Greek but appears to come from the Aramaic (which would have been the language Jesus spoke). It is a dismissive word, signifying worthlessness.

The song “When someone shouts” was written for children and appeared in the collection “Just Like Salt” published in 1986. It is intended to empower children to deal with abuse and abusive name calling as openly and creatively as possible. The abuse experienced by a child may be perpetrated by an age mate or by an adult, even by one in a position of authority or position.

Abuse is not to be tolerated or excused away. Bullies come in many forms, some use physical force, others resort to name calling and to acts of exclusion. It is not helpful to capitulate and to accept bullying as an inevitable part of life. Nor is it helpful to retaliate – to counter name calling with name calling.

Whether we speak of nations, constituencies, families, individuals,

conflict is not inevitable. Reconciliation is possible in many situations, especially if all can recognize the humanity of the ‘enemy’. Forgiveness is possibility, but again forgiveness isn’t about saying the abuse didn’t happen, or that it was justified, or that it can be minimized.

Children will need help. Help to name the abuse. Help to find a way to go forward if that is possible at the time. Help to avoid being consumed by injustice, abuse, unresolved conflict. Help to heal from wounds endured. They will need assurance that what they have experienced was not their fault, not something they asked for or had coming to them. They may need help to discover the worth, the beauty and strength of who they are – to accept that and to nurture that with the help of caring friends and mentors.

The gospel is predicated upon the compassion and forgiving love of God. That means, amongst other things, that we are not imprisoned in the past, that each day allows a new beginning, a new acceptance of grace and a willingness to trust a new unfolding of some of life’s circumstances. When justice, peace, and love are seen as God’s intentions for us, for others, for God’s world , then life changes.

Refrain, one verse, and refrain
played by Ron Klusmeier