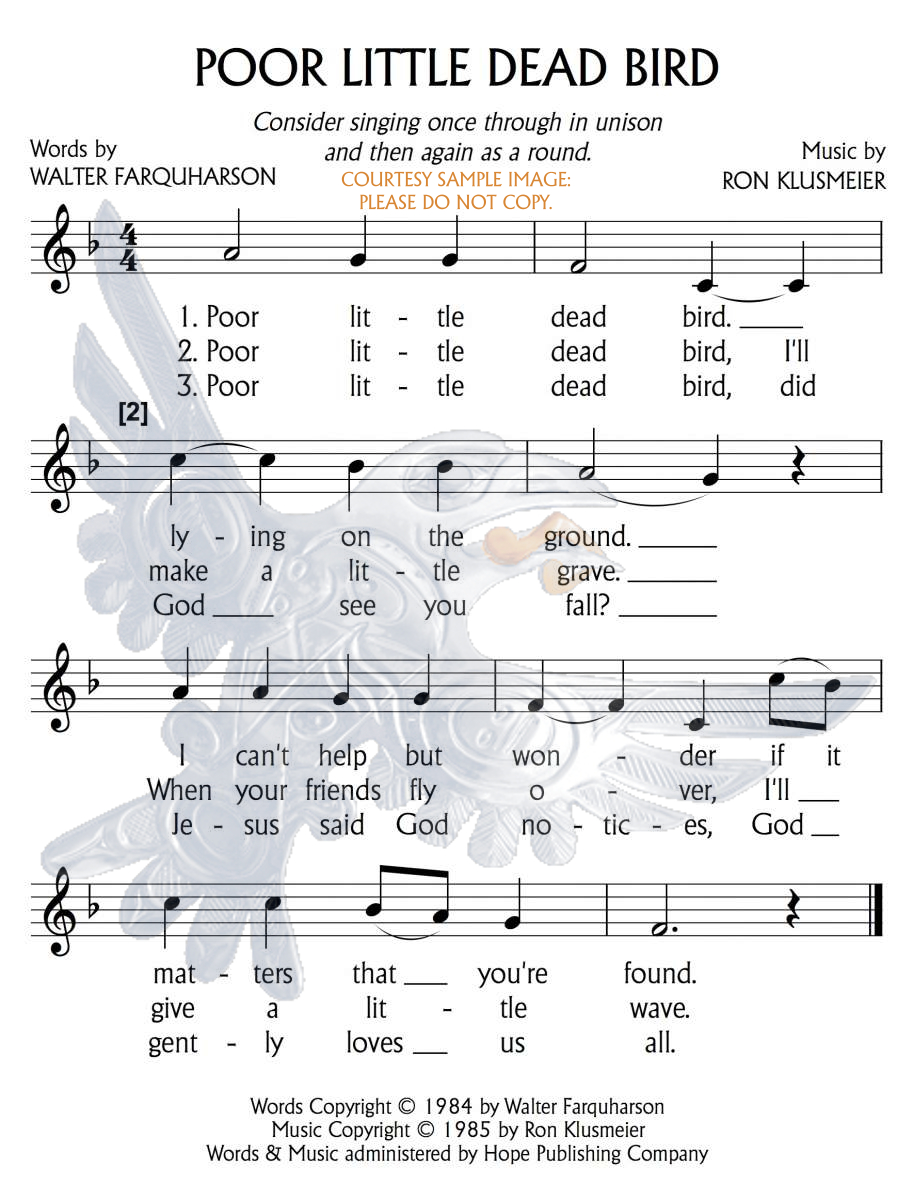 Poor little dead bird,
lying on the ground.
I can’t help but wonder
if it matters that you’re found.

Poor little dead bird,
I’ll make a little grave.
When your friends fly over,
I’ll give a little wave.

The small child and I are strolling around the yard. We’ve seen, commented upon, appreciated many things. Then, almost at our feet, there it is – a little dead bird. The child draws in a gasp of air then exhales a little cry. Ohhhhh! It is a moment of sadness, a natural, instinctive, lament.

In a whisper come the words, “Poor little dead bird. What happened to it? What can we do?”

Then the voice again. “Can we make a grave in the garden and put some stones around it?”  Can we say a prayer?

“God sees the little sparrow fall,
it meets his tender view;
if God so loves the little birds,
I know he loves me, too.

Our service ends. The child dances down the garden path, waving.

Hesitation. A word of explanation is offered, “I’m waving to the bird’s friends so they won’t be too sad.”

“For you shall go out in joy, and be led forth in peace; the mountains and the hills before you shall burst into song, and all the trees of the field will clap their hands!” (Isaiah 55:12)

Today, many years distanced from the event, I think of how important such moments are.  The response to the child might have been, “Yuk. That’s dirty. Don’t even look at it!” Signalled then would have been, “Birds don’t count. That bird doesn’t matter. It doesn’t affect us. We’re not involved. Dead equates with dismissal, a shrug of the shoulders, or, worse, dirty. Don’t be contaminated.”

He used the example of the tiny sparrow – sold for a few cents, deemed valueless, totally dispensable in the eyes of most people.

No sparrow falls without God noting, being aware.  So it is for you, he told his disciples. He might have added, “And so it is for those around us deemed least important, those who live and die without others caring, those whose lives or livelihoods are easily minimalized as ‘collateral damage’. They are seen! They are seen – by God – and by those people of God who see with eyes of compassion.”

How ironic it is that in the corners of the world that are most prosperous and powerful we hear of a social condition that is being characterized, even in some courts of law, as affluenza. I am writing this reflection amidst the unparalleled Covid 19 pandemic. How ironic to see on social media and TV news pictures of the affluent and privileged, ignoring calls to practice preventative social and distance isolation, flocking to the beaches to sunbathe and party or to other milieus to show that either they think themselves totally immune, or that it is all ”fake news”, or that they have no responsibility for others and certainly not for those who are weaker or more vulnerable than they see themselves.

There are many references in the Scriptures to the heart and to the importance of having a clean heart, a pure heart, a loving heart. A consistent word of judgement spoken by the prophets is that the people have hardened their hearts, they have developed hearts of stone. Jeremiah warns that the heart is deceitful above all things and desperately sick (Jeremiah 17:9). Among the promises of God spoken by the prophets is that God will change people’s hearts, giving them hearts of flesh instead of hearts of stone (Ezekiel 36:26).

“Our Father,” he prayed, “your will be done on earth as in heaven. Your kingdom come.”

The church is called to be a school of compassion. We’re called to see that repenting has everything to do with seeking a change of heart, individually and communally. We’re called to think globally while seeing the neighbour close at hand.

Within the United Church of Canada, part of our heritage is that of the Methodist tradition. In his teaching and preaching, John Wesley emphasized sanctification. Basically this meant that a goal of each Christian disciple was to grow in holiness, to seek the perfection Jesus spoke of when he said, “Be perfect therefore as your heavenly Father is perfect” (Matthew 5:48).  Essentially this meant seeking in all things to be governed by the love of Christ.

It is easier of course to adopt a prevailing societal attitude whereby each affirms that they are at least as righteous, if not more so, than the people around them. It is the attitude of religious and non-religious alike. The attitude in turn is reflected in how we think and speak about each other. How we think and speak is, inevitably, acted out – in bullying, in shrugs of indifference to the suffering of others, in hoarding, in acts of intolerance, abuse, cruelty. The old demons – greed, envy, and resentment – dance with delight.

Such graces may all be renewed when we see a poor little dead bird.

ONE VERSE
played on piano