Comment by
SHIRLEY ERENA MURRAY
from her book
“In Every Corner Sing” (#46):

“This was my first text on the theme of Christian unity and the ‘scandal of our divisions’. It has been sung increasingly at ecumenical services in New Zealand.” 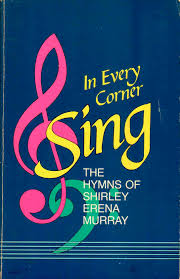 Shirley Erena Murray identifies this as the first hymn she wrote about the church, its shameful divisions and the call to unity. The use of an exclamation mark as part of the title and first line alerts us to pay special attention to that which is designed to throw us off balance. Our “normal”, our “usual” is a distorted sense of well-being. We may think we are in a state of sobriety but we are not. We may assume we can walk the straight line without teetering, but we will fail the gospel test. The saving action of Jesus is to bring us into a new equilibrium consistent with the love-intended unity of God’s people.

We can think about the denominational divisions. The big split that occurred centuries ago between Eastern and Western churches. (There were other divisions too, but they received less press and had more limited impact.) The sixteenth century Protestant Reformation left Europe with new rivals to the Roman Catholic Church – Anabaptists, Lutherans, the Calvinists. These groups in turn tended to subdivide. New divisions were sometimes because of national, ethnic and language differences, sometimes because of disagreements over ways of governing the church, sometimes over issues of doctrine, sometimes over the sins to be emphasized and the sins to be overlooked, sometimes by political decree, sometimes because of the influence of charismatic or autocratic leaders.

Even as the ecumenical movement has brought many together to affirm commonality of faith and co-operation in outreach ministries and advocacy work, a proliferation of faith groups based upon pastor personality and aggressive campaigns to build budgets and entrepreneurial businesses has occurred. Each tends to assert a unique possession of truth and a list of enemies to be fought against.

Another reality demands our attention. We know that within denominations congregations often live as rivals. Those of us within the United Church know how attachment to buildings has often taken precedence over ministry and service within, and beyond, the community. Within each congregation, factions can vie for control of agendas and priorities or set boundaries determining who is welcome and who is not. As we look at the effects of such realities, we more sharply know the sting in the hymnwriter’s choice of words “walls … to keep the Christ outside”.

Interestingly, the gospels themselves tell of how the disciples struggled with suspicion of each other, questioned the “right” of others to heal in Jesus’ name, and sometimes wanted to have a place of prominence within their little band of followers of Jesus. Paul and James both wrote of the divisions within the church and the ways in which those divisions broke down community, sapped the movement of its necessary energy, and took focus away from a ministry of welcoming, healing, and proclamation of God’s New Day. Paul warns about Christians attaching themselves to one or another of the prominent teachers of the faith instead of seeing these teachers as servants of Christ, followers of Jesus. James warns of the divisions based on wealth and status outside the Christian community becoming divisive within the faith family.

Shirley Erena Murray directs us to the place of correction once we have seen the need for correction. We read again the first verse:

“Jesus, Saviour, Spirit, Sun!
you the life that makes us one –
melt us, fuse us in your fire,
mould us in your heart’s desire.”

“Mould us in your heart’s desire.” The unity of Christians, the unity of the peoples of the earth will not happen because we have re-created the family of God to match our image of truth and good practice. It cannot be based on subjugation or capitulation. It will not occur because we craft resolutions, redefine mission statements, hold conferences. It will not occur out of expediency or the recognition of dire straits. Our desire for unity must mirror the desire found in the heart and passion of Jesus. We will need to allow the loving power of the Sun to “consume our shame, melt us, fuse us, mould us.”

An Activity: Pray this hymn each day for a week. At the end of the week , make jottings under the following headings: What Has Changed?

One verse played on piano