It is time! Let the white poppies bloom
and the blood of the past stain no more;
it is time… for the sowing of seed
that will outgrow the jungles of war,

It is time… that the white poppies grow
through the hatreds and hurts that survive,
it is time… for the tumbling of towers
and the building of trust kept alive:

It is time: let the white petals float
over countries and cultures and lands;
it is time…that the dreams that were lost
be reclaimed by our hearts and our hands, 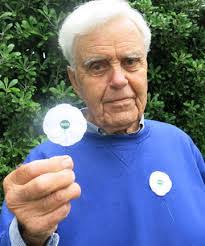 From Ron: Rev. John Murray (Shirley’s husband) was a courageous champion of white poppies. We were privileged to be guests in John & Shirley Murray’s home in Raumati Beach on New Zealand’s Anzac Day in 2014. There had been some rather scathing letters to the editor concerning John’s local campaign which encouraged the wearing of white poppies. When I asked him about the response from some of the public, he simply said very matter-of-factly, “Oh yes, that happens every year. One gets used to it over time, but my commitment never wavers.”

“They told the laddies it was a war to end all wars,” she said so softly. My grandmother seldom talked of war and although she had a photo of her soldier son who had been killed in World War I, that photo was not on display. The photos on her night table were of her sons as boys, her beloved. That night, as she sat watching the burning coals in the space heater that in the winter sat in the middle of the living room in her farm home, she talked of Forrester who died to honour king and country. She talked of his cousin, another “casualty”, who had been opposed to war but who had served as a stretcher-bearer, and of my father who had joined the Merchant Marine because he was too young to join the regular forces. “They told the laddies it was a war to end all wars, but when the war was over they almost made it a crime to speak of peace and of working to end wars.”

I was almost nine that night when she opened her heart exposing grief already decades old. Another war was only months from ending. The Atomic Age would be initiated before six months had passed. “There’s only one way to honour those who died, those who were wounded or broken,” she stated, “and that is to work for peace for all people.” She went on to speak of the need for food, shelter, education. For all. Everywhere. “No one should get rich because there is a war,” I remember her saying, “that will just make them want more wars.”

Over the years I have led many Remembrance Day Services or offered reflections during such services. Never have I done so without remembering that evening with my grandmother.

My grandmother would have worn a white poppy if they’d been thought of back then. She’d have worn it for her Forrester, his cousin, and for all the lads and lasses of the world who have served with courage and devotion and believed, or wanted to believe, a promise of “peace on earth, good will to all.”

An Activity: Write a letter to a young person who gave their life while serving in the military. When you have finished, ask yourself, “Why did I say the things I said? What did I choose not to say? Why?”

"IT IS TIME"
All verses & refrains
played on piano