Comment by
SHIRLEY ERENA MURRAY
from her book
“Touch the Earth Lightly” (#22):

“The ‘strange land’ here is our contemporary world, if we are still tied to a childish faith and frightened to move into the challenges of theology, let alone technology. It’s about ‘testing our faith in a different sphere,’ even to updating the hymns we sing and treasure.” 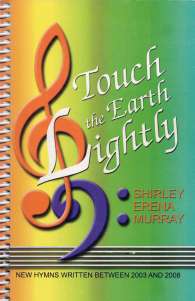 Psalm 137 is a lament over the destruction of Jerusalem by the Babylonian armies in 587 BCE. It is one of several Psalms of the Exile. The Psalmist describes how their conquerors wanted the captives to sing their Jewish religious songs for the amusement of their captors. The same was demanded of some Jewish cantors in the Nazi concentration camps only decades ago. For the Psalmist this is a desecration of the holy – just as the razing of the temple had been such a desecration. Similar humiliation of peoples and trampling on customs and religious rites has marked numerous conquests and subjugations century after century, continent upon continent.

But there is another aspect of the lament. The singer grieved for all that had been, all that was left behind – grieved for the loss of security and assurance of place and truth. Thus the song picks up on the heartbreak and questioning that seems always part of life – whether in traumatic or more subtle ways.
We are a displaced people. Surely that is part of the story of the garden of Eden. The ancient myth (for it is not and was not intended to be treated as ‘history’) speaks of our innate sense of being exiled from somewhere we once knew. The way to the past is blocked by impregnable defense-works. We leave or are driven or urged out, if not physically then emotionally. We may be cared for – just as Adam and Eve were given clothes of animal skins in place of their pathetic attempt to cover up by means of wilting leaves. We take little for the journey even when we believe we are equipped for every eventuality. Our way is uncharted!

Being birthed is a being expelled, exiled. So is being weaned, or giving place to another such as a younger sibling. Life is marked by transitions. New grades, new schools, entry to the world of work, changing relationships. We move – by choice, or because we have been forced to move. We experience new independence and new interdependencies and, in all likelihood, new dependencies. Most change has elements of loss and elements of gain.

The Biblical story divides into great shifts that dramatically shaped a people and ultimately the lives of many peoples and nations. Our tendency to turn that history into a book of proof texts has blinded us to many of the things we could have learned about change, transformation, repentance and renewal.

Consider the following thumbnail sketch and the highlighting of certain events that were pivotal within the unfolding biblical drama: Through a dream Jacob learns that God is not as territorially restricted as he and his kinfolk believed. Famine results in Joseph and his brothers becoming economic refugees who settle in Egypt. This marginalized people are enslaved. The enslaved rise up and escape. They grumble and mumble through forty years of desert wandering. They enter the “Promised Land” and gain place and prosperity. They demand a king and are warned that will not in the long run be good for them – much will be lost through tyrannical rulers. Good kings. Bad kings. Prophets warning of what happens when justice is denied and compassion and care forgotten. Exile. Restoration. Subjugation by Rome and an Empire that insists that Caesar is God. Jesus. The Spirit. A new community of justice, healing, inclusion is proclaimed … And the story is ours – unfolding. And its chapters are filled with paradox and contradictions. There are times of betrayal of the gospel and times when walls of hostility are broken down and love brings renewed promise of the coming, coming, coming, of God’s New Day.

Shirley Erena Murray writes “Your new creation is like the sky with new-found galaxies spinning by which dazzle me.” We may fear the changing worlds we live within and the unfolding possibilities for good or evil, for blessing or curse, life or death. But we also celebrate the old promise of a new song to sing and new life to be found within the promise, “You give me bread when I fear a stone, you do not leave me to walk alone, my heart will trust in your heart’s unknown, O God, my God.”

An Exercise: Consider a change you are currently experiencing. What are your fears about it? What are your hopes? Who, or what, can you put trust in during this part of your life journey?

Audio Sample for "In What Strange Land"

All verses played on piano